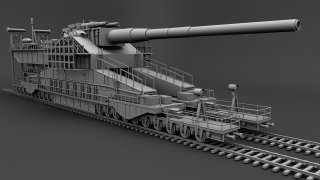 Leading up to the Second World War, one of the obstacles that loomed large in the eyes of the German High Command was the French Maginot Line. The Line was one of the strongest defensive fortifications ever built and among the longest: it stretched from the French-Swiss-German border in the South, all the way to the French side of the English Channel to the North.

Assembly began in the late 1920s and took nearly ten years to finish. The Maginot Line was intended to deter Germany from attacking France and was thought to be impregnable from both the land and the air. The mighty Maginot Line featured a number of anti-tank obstacles and infantry casemates. It also had bunkers that housed artillery pieces, ammunition dumps, mobile rail artillery. In fact, the Maginot Line even included support structures for storing food, housing soldiers in reserve, and communications equipment.

One of the most recognizable features of the Line were armored cloches—steel or iron bell-shaped turrets embedded in concrete bases, some of which were retractable. These were built at particularly important points along the Maginot Line and were a defender’s dream—an attacking force would be incredibly hard-pressed to take these strong points.

Many of the defensive works were connected underground by rail, which was used to ferry soldiers and ammunition. The Line was formidable—and Germany wanted something that could take it on. So, the Wehrmacht approached the German arms manufacturer Krupp. The design that Krupp and the Wehrmacht settled upon was massive—the largest, heaviest artillery piece ever used in combat.

The design specifications were stringent—the gun had to be able to punch through seven meters of reinforced concrete, or one meter of solid steel, thirty-three and three feet, respectively. In order to achieve such massive penetration, a shell larger than anything in existence would be needed: and it was thirty-one inches in diameter, the high-explosive shell weighed over 10,000 pounds, and the armor-piercing shell weighed over 15,000 pounds. These were the dimensions of the Schwerer Gustav—German for Heavy Gustav.

The Schwerer Gustav was transportable only by rail and had to be driven to battlefields where it was needed along two railway tracks that ran in parallel. Although the gun’s elevation could be adjusted, it was fixed in the forward position rather than on a turret and could not aim side to side. In order to properly traverse the massive gun, the rails it rode on had curved spur sections, so that the gun could look out to the left or right. In addition to the 250 soldiers needed to operate the gun, work crews had to survey and lay track ahead of the gun—over 2,000 of them.

Due to complications in building such a massive gun, the Schwerer Gustav was not used against the Maginot Line, though it did see action against the Red Army.

The Battle of Sevastopol on the Crimean Peninsula proved the gun’s worth as a siege piece. In that battle, the gun shot less than fifty rounds, but the destruction it unleashed was prodigious. One of the notable targets it hit during that battle was an underground ammunition dump used to supply Soviet fortifications around the port. Not only was the dump located underwater, it was also about thirty meters, or nearly 100 feet below the ocean floor. Despite being invulnerable to any conventional guns, the Schwerer Gustav’s shells were able to penetrate the magazine—after the ninth shot.

Just two of the guns were manufactured. Post-war, the Schwerer Gustav was dismantled and destroyed to prevent it from falling into Allied hands. The other identical gun, the Dora, was blown up as well—a fitting end for a design that caused so much destruction.