The HMS Prince of Wales is NATO's Newest Aircraft Carrier 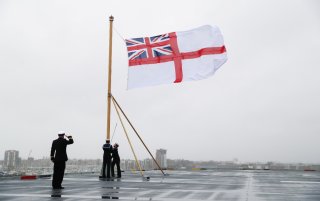 On Tuesday, the NATO flag was transferred to HMS Prince of Wales during an official ceremony on the 65,000-tonne aircraft carrier. The warship departed from Portsmouth on Wednesday morning to begin her 12-month journey as the command platform for Rear Admiral Mike Utley, the leader of the NATO task group. She will spend 200 days at sea while operating globally with NATO allies and other partner nations. It will be the first mission for HMS Prince of Wales since the £3.2 billion vessel entered service in late 2019.

Despite the early morning departure, many gathered at the best lookout points in Portsmouth to wave the warship off.

This new command for the warship comes just a year after the vessel experienced significant flooding that caused damage to her electrical cabling. Following repairs last spring, Prince of Wales began sea trials in April. In October 2021, the Royal Navy declared the aircraft carrier fully operational after she successfully took part in an international exercise off the Scottish coast. The vessel was joined by her sister vessel HMS Queen Elizabeth, which had recently completed her maiden deployment to the Far East.

The ship has proven to be more than ready to take on the flagship role of the NATO Response Force, a coalition that was formed to address major global incidents.

"We have got our orders loud and clear—we've got to be ready to respond and we will be," Prince of Wales' Captain Steve Higham told The News on Wednesday. "The great advantage for us is that we will be working with partners and allies from across the NATO alliance and that strength in depth is what gives us the real edge. This is the start of HMS Prince of Wales's fifty-year life. And to start right at the heart of NATO, as the NATO flagship, is really important."

"NATO is the cornerstone of the UK defense and our commitment to the alliance is absolute, and it is a privilege to be the UK Maritime Component Commander moving into our vital role this year," said Rear Adm. Utley. "The Royal Navy is global, modern, ready and well-placed to support NATO in all its endeavors."