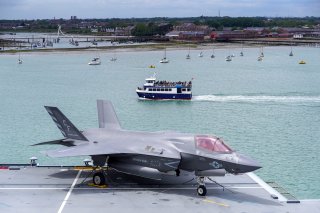 The Royal Navy’s flagship aircraft carrier HMS Queen Elizabeth (R 08) has operated alongside multiple international warships during her maiden globetrotting voyage, and most recently that included a joint operation in the Gulf of Oman with the U.S. Navy's Wasp-class amphibious assault ship USS Essex and the 11th Marine Expeditionary Unit.

During the training in the Gulf of Oman on November 7, VMFA-211 cross-decked F-35B Lightning IIs from HMS Queen Elizabeth to the USS Essex, which highlighted the strategic advantage of the United Kingdom’s Carrier Strike Group as well as the integration of the F-35B jets.

“We are privilegeCopyd to have had this opportunity to train alongside a longstanding NATO ally in the Middle East,” Captain DeWayne Sanders, commodore of Amphibious Squadron One (CPR 1), said via a press statement. “Our integrated aircraft training with HMS Queen Elizabeth has helped demonstrate our efficacy in the region and our commitment to maritime security and stability world-wide.”

“The force development work we have been undertaking with the U.S. Navy has been ground-breaking,” Commodore Steve Moorhouse, commander of the United Kingdom’s Carrier Strike Group, said. “We are all comfortable with helicopters lilly-padding from one deck to another but doing it with fixed-wing aircraft is a whole new game. This level of interoperability goes far beyond anything we have exercised before with any partner and offers a degree of flexibility and agility that Commanders have long dreamt of.”

HMS Queen Elizabeth is the largest and most powerful vessel ever constructed for the Royal Navy. She began her maiden deployment in May of this year. During the twenty-eight-week deployment, the warship made a historic transiting of the Suez Canal and the carrier strike group has visited India, Japan, the Republic of Korea and Singapore. The flagship carrier is expected to return to her homeport of Portsmouth in December.

The U.S. Navy’s USS Essex and the 11th Marine Expeditionary Unit are deployed to the U.S. 5th Fleet area of operations in support of naval operations to ensure maritime stability and security in the Central Region. The U.S. 5th Fleet area of operations encompasses about 2.5 million square miles of water area and includes the Arabian Gulf, Gulf of Oman, Red Sea and parts of the Indian Ocean. The expanse is comprised of twenty countries and includes three chokepoints, critical to the free flow of global commerce.