Honor Defense Guard vs. Glock 43: Which Gun to Choose to Protect Your Home? 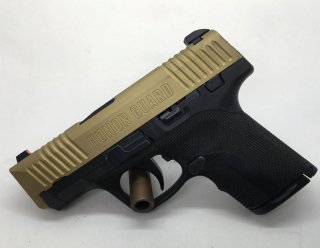 Today I’m going to break down the difference between the Honor Defense Guard 9mm and Glock 43, including weight, recoil, size, build and lots more.

So if you’re looking to know the difference between these two legendary handguns, this article is for you. Let’s get started!

The lightweight Glock 43 (which is very similar to the Glock 32) weighs in at 16.2 ounces with a slightly heavier kick than that of the Honor Guard. While I wouldn’t necessarily call it a “hard kicker,” it’s quite noticeable.

Its magazine is a six-round detachable box and is designed to fire +P loads, although not as easily as its heavier counterparts. It handles fast, and the grip frame fits fairly well into most hands, but larger hands will experience more difficulty and the recoil tends to bite at the bottom of your finger.

On heavy shooting days, you will definitely feel it. There are no forward-cocking serrations to aid in faster reloading, but this may make little-to-no difference in how you shoot. These are mostly useful in competitive shooting, an event for which this handgun is not particularly well-suited.

The plastic sights are often criticized, but there are many aftermarket products available to replace them. In fact, I highly recommend replacing the factory sights immediately upon purchase. Speaking of sights, if you own a rifle like an Ruger 10-22, you should check out Scopes Field’s best scopes for Ruger 10/22 guide.

The main advantage of the Glock 43 is its size: It is light and compact enough that it conceals easily and can even be acceptable for pocket-carry, provided your pockets are larger than normal. It is definitely small enough to be used with an ankle holster and won’t print down there either.

The steel sights are more durable and easier to use than those of the Glock 43, featuring two white rear dots and a highly contrasting orange front dot. The highly stippled hand grip is slightly narrower than the Glock 43 and fits well to the hand.

Testers report good adhesion when firing. The ambidextrous slide lock is slightly heavier and a bit more difficult to use, making it the only downside to the Honor Guard. While takedown is simple for both handguns, it is easier on the Honor Guard. All you have to do is rotate the lever. The cocking serrations are aggressive, which helps cock more quickly but can cause slight wear on your holster.

When fired, the recoil is lighter than that of the Glock 43. Rapid fire was easy. It features a trigger stop molded into the frame, which makes the trigger highly controllable. Despite the heavier trigger (7.2 pounds compared to the Glock’s 5.5), it still had a tighter shot group. Also, it’s worth mentioning that the Honor Guard has a higher capacity than the Glock 43 (eight rounds vs. six).

In a test conducted between four handguns, including the Glock 43, testers found the Honor Guard to be the most controllable and most accurate of all of them. I agree.

While both handguns are small and can require practice to reload quickly, they are still good for home defense and concealed carry.

At nearly the same cost, the Honor Guard seems to be the best all-around everyday carry in terms of accuracy, stopping power, and concealability.

The Glock 43 has enough stopping power and accuracy to get the job done and might be preferable to a very experienced shooter who requires discretion. But its subpar accuracy and the necessity of upgrading its sights demote it to the status of just being a “worthy backup.”