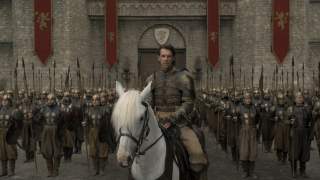 The penultimate Game of Thrones episode “The Bells” marks a shocking turn in the show’s narrative as the long-standing heroine Daenerys Targaryen deliberately lays waste to the capital city of King’s Landing, indiscriminately raining fire upon panicking civilian refugees with her dragon.

It depicts how even in an ostensibly just war, indefensible violence can easily occur—and even may be likely to.

Game of Thrones Fans: Check Out Our New Mini-Section with article after article of GOT content that connects with the national security and foreign policy challenges of today.

Some of the episode’s plotting is undeniably frustrating. After establishing in the previous episode that the Queen’s ship- and wall-mounted ballista artillery posed a deadly threat to Daenery’s air power, the ships and artillery are summarily dispatched in a straightforward head-on attack as if they had never posed any serious obstacle.

Arguably, the episode’s writers also fail to clearly establish Daenerys’s motivations for deliberately attacking the civilian population of a city which had just tolled the bell of surrender.

However, earlier in the episode, Daenerys does suggest a rationale for her impending rampage: as she has so far failed to win the hearts and minds of the people of Westeros, she believes she can only command the populace through fear.

It’s tempting to dismiss such bloody-minded thinking as belonging to a barbaric medieval past, an age when Mongol horsemen put the population of entire cities to the sword to cow others into submission, and when French queen Catherine de Medici had all Protestant guests to her son’s wedding massacred in their sleep.

But unfortunately, the deliberate destruction of cities and the targeting of their civilian populations has a long and terrible history even in the twentieth century that continues in present-day in conflicts in the Middle East. The dragon fire consuming King’s Landing has more than one horrifying historical parallel.

During the 1940 Battle of Britain, the Luftwaffe (German Air Force) ultimately misspent its strength trying to blast the civilian population of the city of London into submission, rather than more productively hammering the Royal Air Force’s vulnerable air bases and radars. Ironically, this did not prevent the British from pursuing the exact same strategy in retaliation, except on a larger scale, as the RAF operated a large fleet of four-engine heavy bombers that the German Luftwaffe lacked.

The British bombers generally resorted to saturation raids on enemy cities at night, as they suffered unsustainable losses to German fighters during daylight hours. British Air Marshall Arthur Harris made it clear there was meant to be nothing surgical about these strikes:

“The aim of the Combined Bomber Offensive...should be unambiguously stated [as] the destruction of German cities, the killing of German workers, and the disruption of civilized life throughout Germany. It should be emphasized that the destruction of houses, public utilities, transport and lives, the creation of a refugee problem on an unprecedented scale, and the breakdown of morale both at home and at the battle fronts by fear of extended and intensified bombing, are accepted and intended aims of our bombing policy. They are not by-products of attempts to hit factories.”

On the evening of July 24, 1943, no less than 791 British Lancaster and Halifax heavy bombers embarked on operation Gomorrah, named in reference to the destruction of the Biblical city.

Screened by a barrage of radar-obscuring chaff that limited the effectiveness of German defenses (only twelve bombers were shot down), the bomber unleashed a mix of incendiary bombs and huge 4,000-pound “block busters” (the name hints at their impact) on the city center of Hamburg.

Firefighters were still battling the blazes three nights later on July 27 when 781 more British bombers plastered Hamburg’s working-class districts. Most of the munitions fell on an area no larger than two-by-one square miles on a hot and dry day. The heat from the blasts ignited a titanic firestorm, producing 150-mile per hour winds and flames lapping up to 300 meters high in the sky.

For three hours, the fiery tornado literally blew civilians off their feet into a roiling inferno. The blaze peaked at 1,470 degrees Fahrenheit, hot enough to literally melt the asphalt on the city streets. The voracious fire devoured 16,000 large apartment buildings and consumed so much air that civilians in air-raid shelters suffocated from carbon monoxide poisoning.

Following the raid, over 1.2 million citizens, many of them homeless, fled the city, perhaps lowering the casualties when a 777-airplane raid again hit the city a third time on the night of July 29 and early morning on July 30. But delayed-action bombs continued detonating in subsequent days, killing firefighters and further terrorizing the population.

In the end, the week of raids killed 42,000 Germans, mostly civilians, and injured a slightly lower number. 214,000 of the city’s 414,000 homes were destroyed, and its geography was left permanently altered.

U.S. bombers also flew daylight bombing raids over Hamburg, though these were targeted specifically at shipyards and industrial sites. However, as discussed in a prior article, U.S. strategic bombing of Japan showed no such reticence about targeting civilians. In addition to the nuclear bombing of Hiroshima and Nagasaki, the massive fire-bombing of Tokyo in March 1945 using napalm cluster bombs created a firestorm that killed 100,000—more than either atomic bombing individually.

There will always be some who reflexively claim that any degree of violence can be justified if it helps meet a desirable outcome, and surely there was never a more justified cause than defeating the genocidal Nazi German and Imperial Japanese war machines.

But even by such cold-blooded calculus, the deliberate targeting of civilian populations consumed inordinate resources for limited practical effects. Four-engine bombers were extremely expensive weapon systems that suffered heavy losses to night fighters and anti-aircraft guns. (During the Hamburg raids bomber faced loses between 1.9 and 3%, although that was considered as lighter losses than usual.) Those premium resources, and hundreds of thousands of tons of munitions, were being liberally expended on killing random German civilians rather than directly inflicting attrition on Nazi frontline combat power.

Surveys also found that the bombing, rather than causing morale collapse, hardened civilian attitudes, motivating them to support the war effort further. German economic minister Albert Speer actually managed to increase German industrial output by the end of the war despite the damage caused by the bombing.

In fact, the most effective aspect of Allied strategic bombing during World War II were the raids that targeted Axis petroleum supplies, not factories or residential housing. By early 1945, the destruction of fuel reserves kept newly built Nazi jets grounded and heavily armored Tiger tanks unable to advanced more than a few dozen miles during the Battle of the Bulge.

Yet the use of air power in military campaigns designed to render cities unlivable continues well into the twenty-first century, as particularly showcased by Syrian and Russian aerial bombardment during the protracted siege of Aleppo. Hospitals, bakeries and schools were repeatedly targeted with helicopter-dropped barrel bombs, canisters of chlorine gas, huge 240-millimeter mortars that could penetrate through to the basement of a building with a direct hit, and rocket-artillery firing fuel-air-explosives that ignite a napalm-like aerosol spray.

Thus, while the carnage of innocents at the end of “The Bells” feels gratuitous, upsetting and deeply unnecessary, it reflects an unpleasant truth: time and time again, real-world leaders made the same choice as Daenerys to unleash their war machines on densely populated cities, with no less horrifying results.