How AI Could Help Soldiers Make Better Choices During a Battle 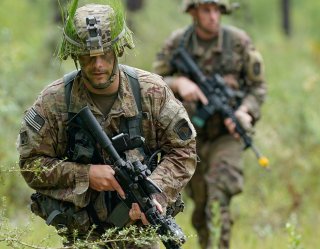 A forward-operating Army unit is under heavy fire and poised to attack. The soldiers are armed with small arms weapons, shoulder-fired missiles, drones and even helicopter support, yet commanders need to know which among many targets to hit. Which targets should be hit first? Are any target points about to fire incoming weapons? Do any of the target vehicles contain innocents or non-combatants? What if there are integrated threats woven together from several different angles and points of view at one time? Essentially a non-linear attack? Which comparable previous scenarios might offer the best course of actions to consider? If squad leaders simply do not know the answers to these questions, they cannot attack, leaving themselves more vulnerable with little time to react.

Dr. Bruce Jette, Assistant Secretary of Army, Acquisition, Logistics and Technology, examined this predicament in a conversation with TNI, explaining that emerging applications of AI are beginning to “perform AI on AI” in a collective decision-making fashion.

“I have eight targets and four enemy vehicles. Which ones are the best ones to shoot? Or does everyone have to decide on their own? Or could I have an AI program that is looking at all eight vehicles seen and decide how I would distribute fire most effectively? It would be an AI program on top of an AI program,” Jette explained.

After all, combat decisions invariably involve a complex tapestry of interwoven variables, including things like sources of incoming fire, enemy size and location, terrain and identifying multiple points of attack. Other important variables are also additional air or surface supportive fires options and, clearly and simply, deciding which weapons to use and where to use them across an entire unit.

“We are looking at how we can apply AI to the analysis of data coming in from various AI systems. I can have an AI system that is generating an image of what is in front of me that gets sent to an AI system that is able to determine whether it is one image or multiple images,” Jette said.

Jette’s description of current Army initiatives involves a host of collaborative efforts to identify and quickly harness or leverage the best available new technologies. Operating within this concept, Jette’s science and technology experts work in close coordination with Army Research Laboratory partners. Together, they are immersed in a complex new series of research and experimentation initiatives to explore the “next-level” of AI. Fundamentally, this means not only using advanced algorithms to ease the cognitive burden for individual soldiers—but also network and integrate otherwise stovepiped applications of AI systems. In effect, this could be described as performing AI-enabled analytics on groups of AI systems themselves, as described by Jette and Army Research Laboratory scientists.

“Autonomy is doing things in a snipped way that can be connected. We can benefit from an overarching AI approach, something that looks at the entire mission. Right now our autonomy solves very discreet problems that are getting more complicated,” Dr. J. Corde Lane, Director, Human Research and Engineering, Combat Capabilities Development Command, Army Research Laboratory, Army Futures Command, told TNI in an interview earlier this year.

What does this mean? In essence, it translates into a way combat commanders will not only receive AI-generated input from individual soldiers but also be able to assess how different AI systems can themselves be compared to one another and analyzed as a dynamic group. For instance, Lane explained, perhaps multiple soldier-centric AI-empowered assessments can be collected and analyzed in relation to one another with a mind to how they impact a broader, squad-level combat dynamic. In particular, simultaneous analysis of multiple soldier-oriented AI systems can help determine the best course of action for an entire unit, in relation to an overall mission objective.

“What is the entire mission and possible courses of action? Do we optimize the logistics flow? Find targets as the dynamic battlefield gets more complex? The Commander can draw upon advanced AI to explore new options,” Lane explained.

Therefore, in addition to drawing upon algorithms able to organize data within a given individual system, future AI will encompass using real-time analytics to assess multiple systems simultaneously and how they impact one another to offer an overall integrated view. All of this progress, just as is the case now, will still rely heavily upon human decision-making faculties to optimize its added value for combat. Integrating a collective picture, drawing upon a greater range of variables will require soldiers to incorporate new tactics and methods of analysis to best leverage the additional available information. Exploring this intersection between new technology and its impact upon tactics, formations and maneuvers, is something Jette described as a top priority commanding much of his time.