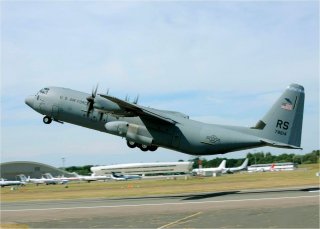 The Air Force has taken a significant step toward flying its historic C-130 cargo planes well into the 2030s or beyond with the delivery of its final, upgraded C-130J airplane. C-130Js are the upgraded variant of the cargo planes, made up of upgraded older C-130H aircraft. The final C-130J aircraft arrived May 27th at Little Rock Air Force Base, Arkansas.

The Air Force plans to fly its war-tested 1950s-era C-130 aircraft well into the 2030s and beyond through a sweeping, multi-pronged technical overhaul, designed to enable the propeller-flown aircraft to perform its high-risk troop transport and combat support missions for decades to come. While there have been many innovations, upgrades and technological enhancements to the aircraft since it originally surfaced in the mid-1950s, the historic cargo plane may wind up flying for more than 80 years.

Recently, the service has been giving the platform new propeller technology, radios, glass cockpit touchscreen displays, digital avionics, collision avoidance technology and reinforced “wing-boxes,” service officials told Warrior. The airframes themselves are a key focal point of the effort, Air Force developers explain, which includes replacing and reinforcing the “center wingbox” of the aircraft where the wings mount to the fuselage.

As for when a C-130 needs a maintenance upgrade to preserve and maintain service life, the Air Force uses an assessment metric referred to as “equivalent baseline hours.” The wing-boxes are changed once the aircraft reaches a certain “severity factor” in its operational service time, Air Force officials have told Warrior Maven. This is necessary because the wear and tear or impact of missions upon an airplane can vary greatly depending upon a range of factors such as the altitude at which a plane is flying.

Called an Avionics Modernization Program by Air Force developers, the upgrades have also included adding new 8.33 radios to the aircraft to improve communication and initiatives to upgrade cockpit voice recorders and digital data recorders. C-130s will also receive new collision-avoidance technology designed to prevent the planes from hitting terrain or colliding with one another mid-air.

As a propeller-driven aircraft, the C-130s are able to fly at low altitudes, land in more rugged conditions and withstand harsh weather such as obscurants. The propellers make the aircraft’s engines less susceptible to debris flying in and causing operational problems for the engines.

An Air Force C-17, by contrast, needs to operate in more defined conditions, such as areas with longer, separated or unobstructed runways. Flying debris or uneven terrain could of course present complications for C-17 engines, whereas the C-130 is specifically designed for low-altitude, high risk combat zones with uneven terrain—scenarios requiring both durability and maneuverability. In fact, in so-called “hot” or active combat zones, C-130s often airdrop weapons, supplies and even troops when called upon by Commanders.