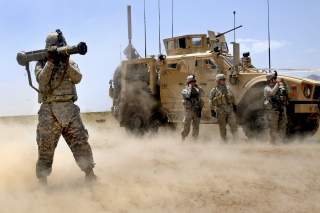 The global proliferation of Russian and Chinese weapons massively increases the likelihood that US Army forces will confront tanks, drones, electronic warfare systems, precision munitions, armored vehicles and artillery made by near-peer competitors.

Although the prospect of major-power mechanized ground war between the US and Russia or China may not seem likely, the US Army is tasked with the need to be ready for any ground-combat scenario. What this means, Army leaders expained, is that the current and future combat environment the globe is both increasingly urban and armed with Russian and Chinese-made tanks and weapons.

Russian-built T-72 and T-90 tanks, Chinese drones, fighters and missiles are now part of Armies around the world who might wind up in conflict with the US. In particular, Pakistan is armed with Type 85-IIAP Chinese-built tanks and Iran is equipped with Russian-made T-72s. Even smaller countries, such as Bangladesh, have Chinese tanks. In addition, a far greater number of smaller countries such as Cuba, India and Libya have Russian tanks. North Korea, not suprisingly, has both Russian and Chinese tanks.

Also, senior Army officials explaine that  if US Army ground forces wind up on the ground in Syria, they will definitely wind up confronting Russian-built weapons. Although such a scenario may or may not happen, the prospect presents a very real threat to Army analysts and trainers.

"If the Army goes into ground combat in the Middle East, we will face equipment from Russia, Iran and in some cases China," a senior Army official told Scout Warrior.

“Every morning I could put a battalion on the north side and a battalion on the south side - and just joust working "Combined Arms Maneuver." I can do battalion-on-battalion and it does involve “Combined Arms” live fire,” a senior Army official said. “Because of the airspace that we have here - and use the UAS - I can synchronize from 0-to-18,000 feet and do maneuver indirect fire.”

This includes the use of drones, Air Force air assets, Army attack aviation along with armored vehicles, artillery, tanks and infantry units equipped for small arms fire, the official explained.

Some of the main tactics and techniques explored during “Decisive Action” live fire exercises include things like “kill what you shoot at,” “move to contact,” “synchronize indirect fire,” and “call-in 9-line,” (providing aircraft with attack coordinates from the ground), Army leaders said.

At the same time, this strategy relies, to some extent, on an ability to leverage a technological edge with a “Combined Arms” approach as well, networking systems and precision weapons able to destroy enemies from farther distances.