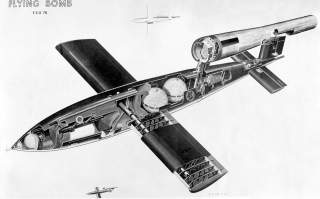 Key point: The V-1 Rocket was terrifying but also intriguing to Allied engineers. The British and Americans worked together to try and learn from Berlin's wonder weapons.

Exactly one month after the first of thousands of Nazi V-1 “Buzz Bomb” cruise missiles began raining terror and death on London, a Dakota transport plane landed on July 13, 1944, at Wright-Patterson Field in Ohio bearing a sinister cargo: one ton of V-1 parts recovered from dud missiles.

The Allies had ample warning of the Nazi missile campaign and undertook massive countermeasures to defeat the V-1 threat. But the U.S. Army Air Force also wanted its own V-1s. It ordered concept work on ten different cruise missiles dubbed the JB (Jet Bomb) 1 through 10.

Northrop’s JB-1 ‘Bat’ was the only original design tested. It resembled a chubby miniature airplane (picture here), with two General Electric B1 turbojets in the fuselage and two 2,000 pound bombs stored in the wing roots. Northrop built ten JB-1s, but the first crashed on the initial test in December 1944, and later trials revealed poor turbojet performance.

The next-in-sequence JB-2 was far more successful for a simple reason: it was reverse-engineered from the Nazi weapon. The Ford Motor Company built the PJ31, a copy of the V-1’s ‘buzzing’ Argus pulsejet, while Republic Aircraft contracted Willys-Overand to duplicate the airframe.

The JB-2 wasn’t an exact duplicate. Its wings were larger by five square feet, and it could be distinguished the straight forward edge of the lead pylon supporting its pulse jet, rather than the V-1’s swept edge. It relied on a wheeled cart to propel it off its launch track before being jettisoned, a design elements first pioneered back in World War I the ‘Kettering Bug (picture here)—a miniature, pilotless biplane that could carry a 180 pound explosive device out to a range of seventy-five miles.

Development proceeded astonishingly quickly, with the initial thirteen JB-2s assembled by September 1944. These were then transferred to a testing facility called Range 64 near Eglin Airfield, and the first test launch took place on October 12.

A thesis paper by Gary Francis Quigg offers a comprehensive overview of the JB-2’s now obscure history. But as Quigg explains, the JB-2 wasn’t obscure during World War II; it was heavily featured in the news media, despite the high failure rate of early tests—as you can see in this archival footage.

The JB-2 may not have been ready for prime time, but Army Air Force Chief Gen. Henry ‘Hap’ Arnold was keen to press ahead with deployment. On January 14, 1945, he ordered a staggering 75,000 JB-2s for strikes on Germany, which in the wake of the Battle of the Bulge may have seemed stronger than it actually was.

Arnold saw the JB-2 as offering a simpler means of achieving the same effect as his huge fleets of expensive four-engine strategic bombers and their fighter escorts. By the Allies’s own accounting, the United States and U.K. lost a shocking 158,000 airmen and 40,000 aircraft in the strategic bombing campaign.

Meanwhile, the German V-1 had delivered a substantial tonnage of weapons at comparatively low cost onto British soil without putting (many) manned aircraft at risk. And V-1s could be cheaply churned out in large numbers.

However, the V-1 and JB-2 alike came with a huge shortcoming—they were too inaccurate to consistently hit anything smaller than a city, falling on average within a seven to fourteen mile radius of a designated target. Daylight bombing raids, though imprecise by modern standards, could at least target a specific factory or military base.

The Allies saw V-1 attacks on London as monstrous, with Churchill even mulling responding with chemical weapons, but they did not have any qualms striking back with the same methods. After all, British night bombing of Germany and American firebombing of Japanese cities deliberately targeted civilians and caused far more deaths than the V-1 ever did.

However, the War Department was nonplussed when studying Hap’s plan, calculating it would require $1 billion and one-quarter of the United States’ trans-Atlantic shipping capacity. Thus, the order was downsized to 12,000 JB-2s

While production increased in tempo in 1945, the Army Air Force intensified testing to make the JB-2 more accurate and reliable, particularly at a new facility at Santa Rosa Island, Florida.

The Army Air Force installed a radar/radio control system allowing JB-2’s to transmit their position and receive course corrections from the air or ground.

But still JB-2s went rogue at times, as described by Quigg:

“On [June] 13th a missile buzzed Panama City, landing eventually near DeFuniak Springs forty miles northeast of Range 64. On the 15th a missile turned completely around over the Gulf of Mexico and was shot down by a chase plane four miles short of Ft. Walton Beach. A wayward JB-2 launched on June 21 headed eastward and landed on Dog Island, one hundred miles from the range.”

Germany had also slung V-1’s onto He-111 bombers to extend range, so the Air Force tested air-launching the weapon from a B-17 (picture here) starting in March, extending potential strike range to 1,000 miles.

But Nazi Germany surrendered on May 8, 1945 before the JB-2s could be put to use—and so they acquired a new purpose: bombarding Japan in support of a massive amphibious invasion. The U.S. Navy also acquired JB-2s and planned to install them on LST landing ships and the decks of small escort carriers for the amphibious invasion of Japan’s home islands—dispatching at least one carrier so equipped.

Japan’ surrender in August 1945 again made the JB-2 was superfluous. Production was canceled in September 1945, with just 1,391 built. But both the Air Force and Navy were still keen on testing new technologies on the JB-2, even as they developed far more advanced cruise missiles.

The newly formed Air Force test-launched JB-2s from even bigger B-29 and B-36 bombers, and developed more elaborate remote-control systems. Ultimately, JB-2s were finally used as target drones to test infrared gun sights.

The Navy had ambitious plans for its own variant, the KGW-1 Loon. After all, if JB-2 could be launched from ships, why not also a surfaced submarine? In fact, in the closing weeks of World War II, the U.S. Navy had mistakenly believed it faced a missile attack from Nazi U-Boats.

On February 12, 1947, the submarine USS Cusk launched a KGW-1 while surfaced, making it the first submarine-launched cruise missile. (You can see a later launch in this video.) This was followed by tests on the submarine USS Carbonero and the seaplane tender USS Norton Sound.

The remote-guidance system by then had matured so that radio control/guidance of the missile could be handed off from the firing platform to a Navy radio station after launch. In one test, the flak guns and patrolling fighter planes of the carriers Boxer and Valley Forge proved incapable of intercepting an incoming Loon.

In Project Trounce, the Navy also developed a Marine Guidance Computer that calculated precisely when a Loon should begin its terminal dive on a target.

When the Korean War broke out, the Navy tapped twenty-five Loons for operational service, and the Army considered deploying sixty as an ‘interim guided missiles for emergency war.” But once again, the JB-2 didn’t see action—though it did star in The Flying Missile, a 1951 drama about a submarine captain yearning to test the standoff range weapon.

In effect, from its humble origins as a mass-produced mechanical terror weapon, the JB-2 acquired then advanced electronic control and guidance systems—forerunners of today’s precise, information-age cruise missiles. Not bad for an outright rip-off of a cheap, mass-produced weapon that lacked the accuracy to hit the broad side of a barn.