How the China-Iran Deal Could Reshape the Middle East 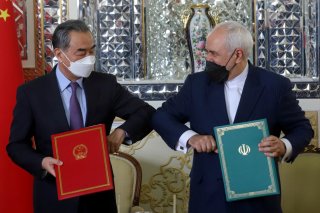 No agreement between two states is more comprehensive than the Sino-Iranian agreement. In fact, it resembles a semi-confederacy, for the deal covers many critical areas such as security, economics, finances, and infrastructure. As the years pass, the respective economies will become more interdependent and interconnected making it more difficult for such an agreement to expire. It is over-simplistic to call it a $400 billion deal, for its strategic significance will determine the future of the Middle East.

The Iranian-Chinese deal was signed in a burgeoning multipolar world. The United States has increased its steps to create an alliance that would entail Israel and Sunni Arab states across the Middle East, including U.S. allies opposed to China such as India. U.S. policies in the Middle East have moved the Sunni Arab states closer to a Jewish state and the Islamic Republic closer to a communist state, similar to what Samuel Huntington predicted, a division across civilizations.

The alliance might also include the two Kurdish polities of Iraqi Kurdistan and Rojava, as exemplified by how a senior US delegation visited leaders of the Kurdistan Region of Iraq (KRI). The KRI and Rojava are the remaining territories in Iraq and Syria where the U.S. military and diplomats are welcomed. The Kurdistan region of Iraq has severed its relations with Iraq and Iran since the 2017 independence referendum.

The most conspicuous reason for the U.S.-Sunni Arab-Israeli alliance is curtailing Iranian hegemony and Chinese involvement in the region. Along with dividing the U.S. burden in the region among its allies, settling the Palestinian-Israeli problem would deprive Iran from exploiting the Palestinian cause to support Palestinian groups and intervene in the conflict.

The alliance also establishes de facto control of strategic sea routes from Malacca to the Suez Canal, routes that the Chinese economy depends on. For instance, China imports almost 75 percent of its oil consumption, and this dependence could be weaponized against Beijing. China’s reliance on the U.S.-guarded maritime routes to import its energy in an increasingly hostile relationship obliges China to reconsider its energy security—making Iran the most viable option.

Almost a third of the allocated sum in the Iran-China deal, $280 billion, would be spent on petrochemical infrastructure. It suggests that China would increasingly rely on Iran for its energy and this would give Iran significant leverage over China. It makes Iran an indispensable ally for China as the Islamic Republic, since its inception, has declared the United States to be an archenemy while both Iran and China oppose the U.S. global dominance.

The agreement also includes stationing 5,000 Chinese troops inside Iran. Acquiescence on the part of Iran as a revolutionary regime that has strived to preserve its independence since the last four decades at a grave cost might raise some fundamental questions, yet Iran appears willing to accept this to make China dependent on its energy sector.

For much of its history since the Achaemenid Empire, Iran has always controlled much of the Middle East or attempted to reach the shores of the Mediterranean. Currently, Iran holds leverages of power in five ancient, prominent Middle Eastern cities that are now capitals making Iran the pivotal state in the Middle East. The Persian empires did not have half of the influence in the Yemeni capital of Sana’a in comparison to what Iran’s Islamic Revolutionary Guard Corps (IRGC) now enjoys. It was thousands of kilometers away with primitive communication abilities. Whereas the IRGC is one click away.

The killing of Qassem Soleimani, commander of Iran’s IRGC-Qods Force marked the end of U.S. political strength in Baghdad. It revealed that Iran was more powerful politically in Baghdad than the United States and how influential Iran has become in securing political agreements with Middle Eastern politicians. Iran further played its political hand by having the Iraqi Parliament vote to expel the U.S. presence from the country, engendering a U.S. stronghold in the Middle East.

Iran exercises a significant soft power in the Middle East, as it spends only a billion dollars on its proxies, a negligible sum compared to what the United States and its allies spend. Iran doesn’t only support Shia groups it also backs Sunni groups such as Hamas. With Tehran as the center of arbitration for much of Middle Eastern affairs, Chinese economic might will seal Iran’s grip on the region.

Iran has an outsized influence in Iraq, Yemen, and Syria through its proxies and pro-Iranian groups. These countries are devastated after years of civil war and insurgencies. Courtesy of its political and economic might in the Middle East, Iran is able to grant contracts to pro-Iranian corporations to revitalize the region in ways favorable to Iranian interests. The Chinese lavish Belt and Road Initiative (BRI) falls in the same category. It has a great potential to rebuild infrastructure in the Middle East.

The United States has neglected building Middle Eastern infrastructure. Even though the United States and its allies have spent trillions of dollars in the region, though twenty years ago the region was relatively in better shape in some respects including security. The United States has usually played an active role in rebuilding regions it has operated in. However, reconstructing Iraq after 2003 was mostly done through Turkish and Iranian construction firms. In the longer term, this will further augment Iran’s soft regional power. Courtesy of Chinese economic might, Iran can rebuild and with it legitimize its political position in the region by lifting millions out of poverty.

For instance, Iraq has signed a three-billion-dollar oil deal with China, and China has provided humanitarian assistance to Yemen and has diplomatically served Iranian interests in Syria. The BRI passes through the volatile Middle East, and Iran will be an indispensable ally in promoting the stability and security that China’s project needs. Iran helped to defeat ISIS in Iraq and Syria, almost ended Al Qaeda in Yemen, and maintains the loyalty of various non-state actors in the region.

The Islamic Republic could become the guardian of the BRI in the Middle East, a region of paramount importance to China and a market with empty shelves that China would be happy to fill. Through the BRI, Iran could further burnish its image and consolidate its hegemony in the region and bring economic prosperity similar to the U.S. securing the global ocean routes that paved the way for China’s rise. This would also discredit the U.S. claim that Iran thrives on chaos and poverty and the assertion that Iran sponsors terrorism. It also makes China less dependent on the U.S.-guarded maritime routes.

The United States and its allies have agreed to the deal Iran wants, yet Iran has not stepped forward. A recent audio leak from Iran’s foreign minister states that Soleimani jeopardized the deal by sending military aid to Syria. This means that the IRGC thought the deal was a tactic for a broader strategy to expel the United States from the Middle East. Hardliners, mostly the IRGC members, designated as a terrorist organization by the United States, are at the forefront of the upcoming Iranian presidential elections. With an IRGC victory in the election, the prospect for a U.S. preferred deal seems dim.

Iran has been quite successful in bypassing U.S. sanctions. Tehran’s agreement with China will make the U.S. sanctions obsolete as Beijing organizes a different, independent financial and economic pole in Eurasia making Iran a more powerful regional hegemon even without possessing nuclear weapons. With Iraq in the middle of these U.S. and Chinese-led opposing blocs, Baghdad might become the Berlin of the twenty-first century, adapted to new circumstances and complex geopolitical realities.

Farhang Faraydoon Namdar is a researcher and journalist covering the Middle East, he was a former Editor in Chief of Birst Newspaper. He has translated books and articles including Francis Fukuyama’s State-Building: Governance and World Order in the 21st Century into Kurdish. Currently, he is a researcher at Gorran Movement/Iraq. He tweets @FarhangNamdar.