How Comcast's Nearly Free Internet Works and How to Get It 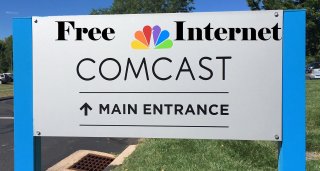 Comcast said earlier this month that, during the coronavirus quarantines, it is offering two months of free Internet to its Internet Essentials customers, while also boosting their speed up to 25/3 Mbps.

What exactly, is Internet Essentials?

On its website, Comcast describes Internet Essentials as "the only program of its kind to directly address all the main barriers to broadband adoption on a large scale," the program offers affordable Internet and computers to low-income Americans, as well as digital literacy programs.

The program launched in 2011, and has been gradually expanded ever since, with Comcast stating that it has connected more than 8 million people through the program since its launch. The company has gradually made more and more people eligible for the program.

Benefits of Internet Essentials include Internet for $9.95/month — with no activation or equipment rental fees — and computers for $149.99 (plus tax.) The special coronavirus offer includes 60 days complimentary service for those signing up before the end of April.

To qualify for Internet Essentials, subscribers must receive some form of state or federal assistance, be in a Comcast service area, not already have Xfinity Internet service or a Comcast balance that's more than a year old.

That federal assistance can include a variety of programs-Medicaid, SNAP, public housing assistance, TANF, WIC, NSLP, SSI, LIHEAP, federal pell grants, tribal assistance programs and those with veterans pension eligibility from the VA.

During coronavirus, various medical personnel and politicians on social media have been pointing potential users to the Internet Essentials program

Per The Verge, Comcast had launched Internet Essentials in order to fulfill a promise connected to the government approval of its merger with NBC Universal, which closed in early 2011. While the company had only committed to running the program for three years, it announced at the end of those three years, in 2004, that it would keep it going. The program has cost $9.95 a month ever since it first launched.