You Can Get Free (Or Nearly Free) Internet from Comcast, Verizon or Charter 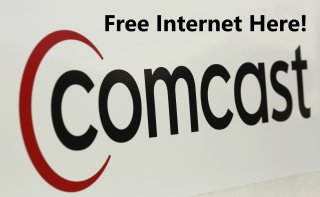 With much of the United States shut down during the coronavirus quarantines and many Americans working from home, Internet access is as important as ever. Some Internet service providers have announced offers of free Internet service, while also waiving late fees and suspending disconnections for those unable to pay.

Comcast announced a series of initiatives earlier this month. It opened its Xfinity WiFi Network nationally for free, even for non-subscribers, while also offering two months of free Internet to its low-income Internet Essentials customers, with the speed also boosted for those customers. The cable giant also made its Internet plans unlimited and paused disconnects and late fees.

“During this extraordinary time, it is vital that as many Americans as possible stay connected to the internet — for education, work, and personal health reasons,” Dave Watson, CEO of Comcast's cable division, said in a statement at the time. “Our employees also live and work in virtually every community we serve, and we all share the same belief that it’s our Company’s responsibility to step up and help out.”

The country's other largest cable company, Charter Communications-owned Spectrum, announced, on March 13, that it is offering 60 days of free access to broadband and Wi-Fi for new customers in households with K-12 and/or college students.

Last Friday, Charter announced that it was expanding the earlier offer to include the offer to educators, including K-12 teachers and college/university professors.

Charter also said that it will partner with school districts in order to make households aware of the offer, and that it will also, like Comcast, open its  Wi-Fi hotspots for public use, and will drop its data caps and hidden fees.

Altice, another cable company, announced a similar offer to Spectrum's, offering a free 60 days of its Altice Advantage 30 Mbps broadband product to households with K-12 and/or college students. Altice has also vowed to not terminate broadband and voice service to any customers unable to pay their bills, while also opening Wi-Fi hotspots and waiving late fees.

Meanwhile, Verizon announced Friday that, among other initiatives, it is waiving consumer and small business Fios and DSL broadband internet plan restrictions and some fees.

Comcast has been criticized, we reported earlier this month, for using the rented routers of current customers to provide that free Wi-fi.