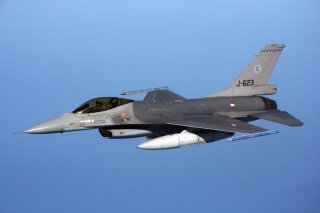 What would it mean if an unmanned, AI-enabled fighter jet were able to out-perform a manned fighter in a dogfight?

Well, that is what happened according to a DARPA-industry simulation exercise in which a drone fighter defeated a manned F-16 by a score of 5 to 0, according to a report from Breaking Defense.

“The three-day trials show that AI systems can credibly maneuver an aircraft in a simple, one-on-one combat scenario and shoot its forward guns in a classic, WWII-style dogfight. In a 5 to 0 sweep, an AI ‘pilot’ developed by Heron Systems beat one of the Air Force’s top F-16 fighter pilots in DARPA’s simulated aerial dogfight contest ” the Breaking Defense story says.

There are several important things to bear in mind here, it would seem. Of course, AI is progressing so quickly that many presume highly-maneuverable, complex-decision-making drone fighter jets will be operational in the near future. At one point several years ago, former Navy Secretary Ray Mabus said the F-35 may ultimately be the last manned fighter. While that view does not represent the current thinking of U.S. weapons developers, it does point to the broad recognition that algorithms are enabling this kind of capability quickly.

For instance, despite the apparent success of the exercise, there is little consensus that human pilots will be replaced anytime soon. Here’s why: there are certain problem-solving faculties and attributes unique to human cognition which machines may be a long way from fully replicating. Army Research Scientists say current AI, which is based structurally upon the vision nerves of mammals, has a long way to go before it can even begin to approximate the total complexity of the human brain.

It seems significant to point out that the superiority of an AI-enabled platform emerged during a “computer simulation” and not an actual replicated dogfight. This is significant for several reasons, it is not yet clear that AI-empowered systems can instantly process fast-emerging new variables or consider the totality of an overall combat circumstance including a range of disparate factors.

Can a machine learn in real-time should it encounter a weapon or circumstance not stored in its database? It may not have a reference point against which to analyze new information.  Advanced AI-systems are only as effective as the database they operate with. Now there is much work going on to expedite real-time machine learning and fast-moving or immediate analytics, yet it is not yet fully established that machines can reliably process all new information as quickly and as accurately as humans can.

Certainly, machines can react and perform various analytic and procedural functions much more quickly than humans, yet they may not yet be evolved to the point where they can simultaneously account for a wide-range of interwoven, overlapping or even contradicting variables.

Perhaps, therefore, a combination of human-machine coordination might make for the best approach, given that it could both optimize the speed of decision-making enabled by computers and rapid analysis while still preserving and calling upon those particular characteristics unique to human cognition?

This kind of man-unmanned networking and connectivity is precisely what the U.S. military services say is the most important tactical and operational approach to prioritize; a man-computer combination can, the thinking goes, easily out-perform an isolated human or isolated machine.