Why America Is Modernizing Its Nuclear Weapons Forces 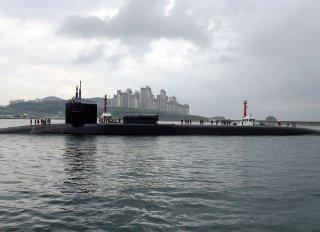 The Commander of the U.S. Military’s Nuclear Weapons force could not have been clearer when he flatly stated that, “we didn’t start an arms race.”

“I don’t understand the criticism that we are starting an arms race. Fifteen years ago Russia started to unilaterally modernize its nuclear fleet. China was not too far behind. Our response was to do nothing. No one has lowered nuclear weapons more than the U.S.,” Admiral Charles Richard, Commander, U.S. Strategic Command, told The Mitchell Institute for Aerospace Studies in a recent video series interview.

While being clear to say, “we love the conversation,” indicating that he welcomes criticism and debate, Richard was unambiguous that the U.S. has fallen way behind on nuclear weapons modernization.

To reinforce his claim, Richard offered some specifics. For example, he said that the U.S. Ohio-class, nuclear-armed ballistic missile submarines were designed to serve for thirty-years, yet they will be functioning for forty-two years. The Minuteman III intercontinental ballistic missiles (ICBMs) were initially intended to last only ten years. However, now, sixty years later, the United States is finally building a new generation of ICBMs.

The need for nuclear modernization has long been on the minds of U.S. military leaders and Congressional decision-makers, as few can believe that the U.S. is still fielding ICBMs built decades ago. While there has been some modernization and sustainment, there are clearly limits to how much any kind of increasingly-old weapons system can be modernized.

Richard was equally candid about the threat environment. While he specified that many details would not be available due to security reasons, he did speak broadly about Russian and Chinese nuclear weapons modernization.

He said China is completing its nuclear triad with the addition of air-dropped nuclear weapons and, perhaps of greater concern, has developed road-mobile launchers and silos. Russia, he said, has been modernizing “everything,” and is almost 70% complete.

Furthermore, Russia claims to have nuclear-capable hypersonic weapons, and both Russia and China have newly emerging stealth bomber platforms.

Among the largest concerns is China’s fast-growing fleet of nuclear-armed submarines, soon to be armed with new, long-range JL-3 nuclear missiles.

The Chinese have just added two new nuclear-armed ballistic missile submarines to their Navy, bringing the total number up to six. While America operates twice as many, the growing number of Chinese nuclear-deterrence submarines expands the ability of Beijing to hold the continental United States at substantial risk.

As recently as May of 2020, two additional Chinese “Type 094 SSBNs, had entered service,” according to a Congressional Research Service Report called “China Naval Modernization: Implications for U.S. Navy Capabilities.”

The newest type of SSBN, according to the Navy report, is armed with twelve JL-2 nuclear-armed, submarine-launched ballistic missiles, the CRS report explains. They are also armed with Anti-Ship Cruise Missiles, wire-guided and wake-homing torpedoes and mines.

Perhaps of greater concern, the Chinese have already test-fired an emerging JL-3 nuclear-armed ICBM with a reported range of more than 5,600 miles, according to a 2018 CSIS report. That missile is also solid-fueled, allowing easier and quicker launch preparation.

The United States has not had to confront the prospect of military confrontation with a nuclear-armed major power in nearly thirty years, Richard said, creating a circumstance wherein U.S. “strategic deterrence which has always been foundational, will be tested in ways that it has not been tested before.”

Yes, ultimately, the ability to harness unimaginable destructive power is aimed at preventing war. “The point of deterrence is the threat of imposing a cost that is greater than what the adversary seeks to gain,” Richard said.