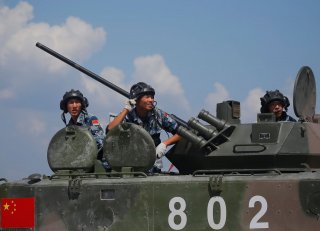 The Chinese military is demonstrating the ability to conduct multi-domain amphibious attack operations for a “potential military operation on the island of Taiwan,” by landing Z-10 helicopters on amphibious assault ships.

A report in the Chinese government-backed Global Times specifically cites analysts referring to a possible attack on Taiwan.

“The combination of Army helicopters and Navy warships can significantly boost the PLA’s amphibious, vertical landing capability and will play a vital role in potential military operations on the island of Taiwan,” the report says.

The exercise was described as a “sea-crossing assault” drill intended to prepare the People’s Liberation Army for new tactical amphibious assault capabilities. The helicopters took off from a land base, according to the paper, before landing on the flight deck of a Chinese Type 071 amphibious assault ship.

The report says the Z-10s bring attack options and fire support that China’s Navy Aviation Forces does not have.

If several ship-based helicopters are in flight, new aircraft arriving from land can descend onto the amphibious assault ship, refuel and rearm before rejoining the attack mission.

The U.S. military has been practicing these kinds of cross-domain maneuvers for many years already, and it would be accurate to say that the United States may be well ahead of these kinds of maneuvers demonstrated by China.

Existing U.S. multi-domain strategy has already involved numerous Army-Navy task forces in the Pacific aimed at refining cross-domain attacks, and the services have begun to explore a variety of new inter-service combat tactics. In fact, U.S. Army helicopters have operated from Navy ships on many occasions.

For example, Army weapons developers have explained that there is no reason land-based rockets or artillery could not be used to attack enemy surface ships. It is also conceivable that previously land-based weapons, such as rockets, guns or missiles, could be integrated to fire from the deck of Navy ships.

Despite the apparent success of this exercise, it seems clear that the true merits of multi-domain operations may likely reside in advanced networking. This is a huge focus for the Pentagon, which is now advancing Joint Multi-Domain Command and Control initiatives.

The idea is to enable air, surface, undersea and land platforms to share information in real-time, a technical capability designed to optimize attack options available to commanders. Integrated intelligence, surveillance, and reconnaissance (ISR), it could be said, offers the true margin of difference regarding the application of cross-domain operations, particularly with respect to amphibious assault.

Whether Chinese forces can approach this kind of networking so far remains unclear. However, the relevance of the assault drills, it seems, hinges upon the extent to which land-launched attack helicopters can receive and execute targeting information from air and surface assets. The circumstance invites many questions, such as whether Chinese Z-10s can control unmanned systems from the cockpit in a manner similar to what the U.S. Army can do.