Yes, the U.S. Army Is Getting Its Own Iron Dome Defense System 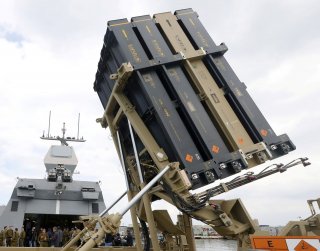 Raytheon will now be building a cutting-edge rocket, artillery and mortar defense system, opening up new possibilities for the U.S. military and allied countries to improve air and missile defense.

The much-discussed Rafael-Raytheon Iron Dome system fires a Tamir missile to knock out attacking threats from the sky from as far away thirty miles or more, using radar and electro-optical sensors.

Raytheon and it Israeli partners Rafael Defense wi a U.S. production facility for the Iron Dome with the hope of delivering the first system within as little as two years. The Iron Dome weapon has already been used with success in Israel.

Last year, the U.S. Army announced that it plans to buy two Iron Dome systems as an “interim capability.”

“Iron Dome detects, assesses and intercepts a variety of shorter-range targets such as rockets, artillery and mortars. It is effective day or night and in all weather conditions including low clouds, rain, dust storms and fog. It features a first-of-its-kind multi-mission launcher designed to fire a variety of interceptor missiles,” a Raytheon statement says.

It makes sense that the U.S. Army would want the system, as the service is again heavily emphasizing ground-based air and missile defense. Focusing on Short Range Air Defense was something of great significance during the Cold War due to the Soviet threat. However, this focus “atrophied” during the years of counterinsurgency in Iraq and Afghanistan, according to one senior Army official. Therefore, the Army is developing vehicle-fired interceptor missiles such as Hellfire as part of its Short Range Air Defense program.

Iron Dome, it would seem clear, emerges as a complement to this program as it brings mobile, ground-fired drone, mortar and artillery defenses. The system could defend armored convoys on the move from incoming enemy fire by finding and “knocking out” approaching artillery or drone weapons. The Iron Dome’s Raytheon and Rafael-built Tamir uses steering fins and a proximity fuze, according to Raytheon’s information.

This is significant as it enables the Tamir missile to explode near a series of approaching enemy munitions or drones to ensure a “kill” of otherwise somewhat elusive or maneuvering targets.

Iron Dome can also be used for critical Forward Operating Base (FOB) protections as a “ready now” technology designed to stop enemy attacks from harming sensitive fortified areas home to U.S. forces, headquarters and weapons. The system can complement several existing and emerging FOB protection programs, such as Army efforts to mount a Phalanx area defense weapon on the back of a Tactical Truck such as a Heavy Expanded Mobility Tactical Truck.

The Army is also developing a new system called Indirect Fire Protection Capability Increment 2 intended to track and destroy approaching enemy fire. Increment 2 includes drone defense alongside cruise missile defense. The weapon system is designed to detect, track and take out mortars, cruise missiles, artillery and drones. Moreover, it is certainly feasible that the Iron Dome could be networked with other drone-defenses and FOB protection weapons.

Drone defense is a specialty for Raytheon, a firm that has spent recent years refining an integrated Counter UAS technical system intended to recognize approaching attacks, perform needed analytics, and destroy them at safe ranges. Raytheon’s integrated system uses a 360-degree mobile radar system called KURFs along with an interceptor Coyote drone engineered to work in tandem for drone defense. The concept is to develop AI-enabled analytics sufficient to find, classify and analyze approaching drones, perform real-time analytics, and determine which defense or “effector” is best suited to destroy the enemy drone.

Perhaps an electronic warfare system is needed to jam a drone signal and prevent a large explosion over a populated area? Perhaps a precision-fired laser is considered the idea method to incinerate or disable an enemy drone? A proximity fuse could explode in the direct vicinity of an approaching swarm of drones to destroy groups of them. Also, there are clearly situations where the best defense may be to fire a coyote explosive, a mini-bomb drone able to intercept and explode the enemy drone.