Why the Navy Wants a Fast-Operating Undersea Drone Program 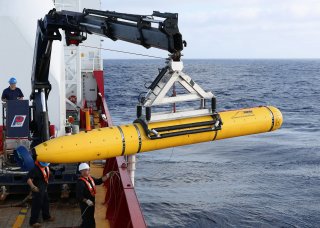 The service plans a fleet of differently-sized undersea drones, to be launched from ships and undersea platforms such as submarine torpedo launch tubes; they are quickly being engineered with advanced sonar detection, countermine systems and an ability to target and destroy enemies from beneath the ocean, all while helping larger submarine and surface platforms operate at safer stand-off distances. It is within this strategic vision that the Navy is now pursuing a Medium Unmanned Underwater Vehicle (MUUV) program to operate in what Naval Sea Systems Command refers to as the Razorback Torpedo Tube Launch & Recovery configuration. “It will provide submarine-based autonomous oceanographic sensing and data collection in support of intelligence preparation of the operational environment,” a statement from Naval Sea Systems Command said.

The platform is being designed for reconnaissance, attack and mine countermeasures. Undersea drones not only keep manned crews at safer distances to maintain command and control, but they naturally bring new dimensions of “endurance” to maritime warfare by virtue of being able to remain on missions much longer. While the current solicitation is for a torpedo-tube undersea-launched drones, the service also plans a surface-launched expeditionary variant of the platform. An interesting essay from the National Academy of Sciences, called “Military Robotics: Latest Trends and Spatial Grasp Solutions,” cites the unprecedented advantage of being able to send large undersea drones through the open ocean for as long as seventy days.

UUVs are also now the subject of a fast-evolving Navy Unmanned Maritime Autonomy Architecture (UMAS) program, which involves engineering and testing “different layers of autonomy,” according to PEO Unmanned and Small Combatants Unmanned Maritime Systems, Capt. Pete Small. Describing the program at the Surface Navy Symposium in January of this year, Small explained that autonomy can enable mission scopes previously not possible, such as longer-range undersea attack and surveillance. A forward-positioned undersea drone could, of course, operate in dangerous areas filled with mines, enemy submarines or other threats in both deep water and coastal areas. Being unmanned, they can also enable submarines to hit undersea, surface or land targets with greater standoff distance and improved targeting. At the moment, undersea drones predominantly gather data and then return to a host ship before downloading data. The service is now working to evolve and refine a handful of new ways to communicate undersea in real-time, in some cases using video-guided autonomous undersea attack drones. Other emerging technologies enable submarines to make use of undersea "GPS-like" connectivity.

The Navy plan is to one day soon have forward-positioned undersea drones able to fire weapons. Many emerging Navy UUV configurations are certainly large enough to accommodate weapons payloads, and it seems such an option is entirely feasible, depending upon the pace of undersea connectivity and fire control. Of course, it goes without saying that the use of any kind of lethal force would, according to Pentagon doctrine, require a human functioning in a role of command and control to make attack decisions. Small undersea drones, such as Raytheon’s Barracuda, are already being used as explosives to track, approach and then explode enemy mines.