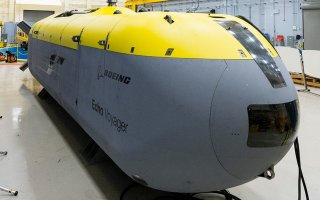 What the United States Navy wants and what the United States Navy will be able to afford in the coming years is unlikely to match up, and as it continues to address increasingly powerful Chinese and Russian navies, this could give a lot of people many a sleepless night. China is currently testing out the Shandong, its first domestically-built aircraft carrier while Russia continues to bolster its fleets in a slow but methodical manner.

As the same time President Trump cut the Navy’s shipbuilding budget by $4 billion, according to the 2021 budget request outlined earlier this year, the Navy would acquire 44 vessels through 2025—down from a planned 55 vessels.

To address those concerns will require the U.S. Navy to consider other options—and among those could include autonomous weapons including robot submarines.

According to a report from Defense One, an internal study from the Office of Secretary of Defense is exploring ways that a large robot submarine force could free up the larger manned boats for more complex missions. The study, which was spearheaded by Secretary of Defense Mark Esper’s internal think tank, the Cost Assessment and Program Evaluation Office, recommended that the Navy invest in as many as 50 of the extra-large unmanned underwater vehicles (XLUUV).

Such an endeavor would be a fraction of the cost of the Navy’s Virginia­-class attack submarines.

The study also envisioned the fleet of 2045 and recommended that the Navy drop to nine carriers from its current 11 but add dozens of large and medium-sized unmanned vessels as a cost saving measure. Unmanned Surface Vessels (USVs) along with unmanned semi-submersibles could lay mines, launch attacks and even provide intelligence.

Ominously the Chinese People’s Liberation Army Navy (PLAN) has already been making good progress with its own USVs, and those could help the Chinese fleet match the U.S. and U.K. fleets in undersea warfare. Fortunately, the U.S. Navy has been working on an autonomous submarine platform dubbed “Orca,” and in February 2019 awarded Boeing a $274.4 million contract to build four (later increased to five) of the XLUUVs.

The Orca is based upon Boeing’s Echo Voyager and Echo Ranger undersea drones but essentially super-sized. Initial applications for the Orca could include land-launched operations—which could lead to surface and undersea launches. However, at 50-tons the Orca may be too large to be launched form a submarine or ship at the current time, but the planning is to have it pair with a surface “mother ship” or from a larger submarine, such as the Virginia-class. These larger vessels could then coordinate command and control, receive information and in some cases even direct mission activity for the undersea drone.

Missions could include those that are too dangerous for a larger manned boat.

The Washington Post reported that the Navy’s Orca is about 300 times less costly than a $3.2 billion Virginia-class submarine—but noted that the biggest threat to the Navy program isn’t China but rather the lack of lobby to rival the giant defense contractors.