China's Navy Is Testing Out Its its First Indigenous Aircraft Carrier 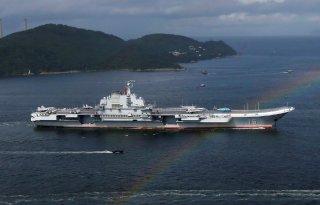 China’s Ministry of National Defense is reporting that its first indigenous aircraft carrier, the CNS Shandong, is now carrying out sea trials in preparations for deployment and possible war, marking a substantial step forward in China’s longstanding Naval modernization efforts.

While of course there are many unknowns with China’s first home-built carrier, it does appear to massively increase the country’s power-projection possibilities, bringing new Pacific-area and international threat possibilities to the U.S. Navy. The sea trials are being conducted according to an annual plan, spokesperson Ren Guoqiang told reporters, according to the Chinese publication People’s Online Daily.

“The training is aimed at testing the performance of the aircraft carrier’s weapons and equipment, improving the training level of such warships and honing the capabilities of personnel to fulfill missions,” Ren said according to the report.

The conventional wisdom seems to be that China plans at least 4-home built carriers to further emerge as a major international maritime power. The move with carriers is all part of a broader strategic Naval modernization campaign which has been fast-moving for many years. Many observers and even U.S. Congressional researchers have taken notice of Chinese Naval modernization and, in many instances, made the point that it may soon rival or even surpass the U.S. Navy in terms of sheer size. Recent assessments have maintained that the Chinese plan to operate as many as 351 ships, a number significantly greater than the U.S. Navy.

The new carrier is one piece of an increasingly complex Chinese Naval puzzle which includes the introduction of new Type 055 destroyers, ballistic missile submarines, small patrol boats and capable new amphibious assault ships, according to Pentagon and Congressional reports.

Chinese power projection is by no means limited to its growing carrier fleet, which will likely launch the emerging 5th-Gen stealth multi-role fighter, the J-31. There is much discussion that the Chinese may convert their new Y-20 Cargo planes into aerial refuelers, a move which would vastly expand the maritime attack reach of a carrier-launched J-31. The Chinese have also been building new Yuzhao LPDs, amphibious assault ships which can carry 800 troops, four helicopters and up to 20 armored vehicles, the report said. Such capacity gives China an ability to launch large-scale amphibious attacks, placing South China Sea islands and Taiwan at greater risk.

While dated, one of the more detailed, publicly available reports on Chinese Military Modernization can be found in a 2014 Congressional report called the U.S. China Economic and Security Review Commission.