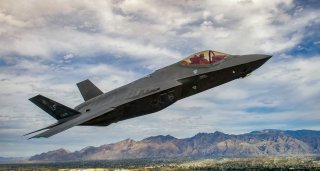 Although the unstable North Korean regime could test some kind of nuclear weapon or new ballistic missile to intimidate South Korea, the possibility of the Hermit Kingdom launching massive, mechanized ground assault across the DMZ cannot be fully discounted. Clearly, South Korea should be prepared to repel some kind of armored assault from the North.

This kind of deterrence could be achieved by simply maintaining a modernized, trained, and well-equipped army to defend the border. But it also stands to reason that preventing this kind of attack could be the main reason why South Korea is acquiring the F-35 fighter jet.

Why North Korea Hates the F-35

It is clear that a stealthy fifth-generation fighter jet, such as the F-35 jet, gives South Korea a massively increased ability to destroy North Korean air defenses, achieve air superiority or even track and attack the North’s known arsenal of road-mobile missile launchers. Beyond that, a fleet of F-35 jets could prove decisive and impactful in any kind of defensive stand against a North Korean invasion.

This is particularly true given the glaring discrepancy between the North and South Korean armies. Globalfirepower.com lists North Korea as now operating a sizeable 1.3 million man active-duty force, with millions more in paramilitary support. Their military reportedly operates as many as six thousand tanks and ten thousand armored vehicles alongside a well-known arsenal of medium-range ballistic missiles capable of reaching major South Korean cities. South Korea, by comparison, is listed by Global Firepower as having only six hundred thousand active-duty forces as several million fewer paramilitary capable soldiers, when compared with North Korea. Perhaps of even greater consequence, Seoul is cited as operating only twenty-eight hundred tanks, less than one-half of North Korea’s six thousand tanks.

Why Seoul Needs the F-35

Add to this overall equation the networking and allied advantages associated with the F-35 jet. South Korea’s deterrence posture will be greatly fortified and strengthened by a large Japanese F-35 force along with a regular U.S. presence of F-35C-armed carrier aircraft and F-35B-armed amphibious ships.