How Iran’s Threats are Driving Israel and Azerbaijan Closer Together 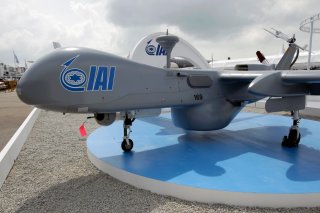 When writing about international affairs we should differentiate between different types of threats to states and thereby better able understand why countries enter into strategic partnerships. One such case is that of Azerbaijan’s two-decade strategic partnership with Israel, two countries which Iran has threatened to wipe off the map. Iran is and will long continue to be an existentialist threat to the very existence of Azerbaijan and Israel.

While their strategic partnership is based on countering similar threats, what is traditionally ignored is the degree to which identity questions are central to understanding the dynamics of Iran’s antagonisms towards Azerbaijan and Israel.

Iran sees both Azerbaijan and Israel as interlopers in the South Caucasus and Middle East respectively. In the minds of the Islamic fundamentalists ruling Iran, the Jewish State of Israel has no right to exist in what it considers to be Palestine. To be clear, Iran’s goal of wiping Israel off the map has everything to do with anti-Semitism and nothing to do with defending Palestinian minority rights as Tehran has always supported Christian Armenia’s occupation of Muslim Azerbaijani territory.

Iranian nationalists view Azerbaijan as an aberration because they do not recognize the existence of an Azeri nation. Although 20-30 million Azerbaijanis live just across the Aras River in Iran (two to three times Azerbaijan’s population), they are not recognized as the second-largest nationality after Persians and, therefore, are not provided with educational, cultural, and language rights.

Iranian and Russian nationalists both dismiss the very idea of Azerbaijani and Ukrainian nations. Ukrainians, who represent the second-largest minority in the Russian Federation, also have no language, cultural and education facilities. Russian President Vladimir Putin has repeatedly said Russians and Ukrainians are “odyn narod” (one people), a view shared by many in the Russian opposition such as Alexei Navalny.

Russia and Iran have sought to prevent Ukraine and Azerbaijan from becoming strong independent states. Azerbaijan has been able to assert its independence through its large energy resources, strategic partnerships with Israel and Turkey, and leadership of the non-aligned movement. Ukraine and Azerbaijan built efficient and well-equipped armies after military defeats and territorial conquests by their neighbors.

In the 1990s, following its defeat in the first Karabakh war and loss of a fifth of its territory, Azerbaijan had few major allies. Azerbaijan was threatened by Iran to the south and Russia and Armenia to the north and west.  A U.S. diplomatic cable cited an Azerbaijani commentator who quipped, “A wise politician once remarked, not without humour, that Israel and Azerbaijan are almost equally unlucky with their neighbours.”

Only in 2000 did an Israeli-Azerbaijani strategic partnership begin to materialize. In 2007, a diplomatic breakthrough came with Israeli President Shimon Peres’ visit to Baku. A more assertive foreign policy under Recep Tayyip Erdogan from 2010 led to an additional cementing of a Turkish strategic partnership with Azerbaijan. Turkey also views Iran as a threat to its national interests and a geopolitical competitor in the Greater Middle East. Israeli arms were decisive in Azerbaijan’s victory in the forty-four-day second Karabakh war.

Soviet military and security forces backed Armenia in the late 1980s in its irredentism towards Azerbaijan leaving deep levels of suspicion of the Kremlin’s goals in the South Caucasus. Meanwhile, Iran and Russia have both pursued policies of destabilizing Azerbaijan and Ukraine respectively through terrorism, diplomatic and military threats, and attempts to overthrow their governments. Iran has threatened and Russia has actioned territorial conquest towards Azerbaijan and Ukraine.

Nationalism and religious fundamentalism have been behind Iranian attempts to spread the Shite revolution to Azerbaijan and return it to its Persian roots. Sepah-e Pasdaran, Iran’s Islamic Revolutionary Guards Corps, have dispatched Al Qaeda and Hezbollah terrorists into Azerbaijan to undertake bombing campaigns against Israeli, U.S. and Western diplomatic facilities, police stations and schools. President Ilham Aliyev, Israel’s ambassador, Jewish teachers, and rabbis were targeted for assassination.

Azerbaijani, similar to Ukrainian, patriotism has only served to be galvanized by these Iranian and Russian threats. Going ahead with the Peres visit despite Iranians threats sent a signal to Tehran that it “cannot push Azerbaijan around.” Baku pointed out that Iran’s cooperation with Armenia, which has occupied Azerbaijani territory, contradicts the solidarity of the Islamic world.

Iran’s planned terrorist attacks were thwarted by joint security cooperation between Azerbaijan and Israel who hold identical positions on combatting international terrorism. For the last decade, Israel has manned listening posts and used unmanned aerial vehicles (UAVs) on the Iranian-Azerbaijani border to collect intelligence on Iranian military affairs and human intelligence, often from the Azerbaijani minority, on public attitudes to the Islamic regime in Iran. Unconfirmed reports point to Israel controlling an airfield in Azerbaijan close to its border with Iran which has been possibly used for intelligence operations and assassinations of nuclear scientists and terrorist leaders inside Iran. Other reports, denied by Baku, suggest the airfield would be used if Israel opted to bomb Iranian nuclear facilities if it believed Tehran was close to building a nuclear weapon.

Clearly, the spread of the Iranian Shite revolution is not in the interests of Israel or the United States. Importantly, Iranian fundamentalism has no support in Azerbaijan; a country that rarely comments on Israeli-Palestinian questions. Religion is important to only a third of Azerbaijanis compared to two-thirds of Turks. Meanwhile, only 8 percent of Azerbaijanis, the lowest support out of all the world’s Muslim nations, support Sharia becoming their country’s official law, in contrast to 42 percent and 91 percent of Russian and Iraqi Muslims. Azerbaijan’s secular identity is grounded in Turkic—not Persian—culture.

Added to this is the complete absence of anti-Semitism in Azerbaijan, a state of affairs praised by Israeli and U.S. Jewish organizations. Tehran’s insecurity is exacerbated by its own Azerbaijani minority exhibiting pro-Israeli sentiments after the decisive impact of Israeli weapons in Baku’s military victory. As one of them wrote to the Chicago-based Gunaz TV channel: “Whoever is against the Iranian regime is our friend.”

Tehran’s existential threat to Israel and Azerbaijan will not disappear anytime in the near future and therefore the Israeli-Azerbaijani strategic partnership is here to stay. In the words of an Azeri diplomat, Iran is a “‘cornered, wild animal’ which is ‘not going to back down.’” It is in the U.S. national interest to, therefore, return to a more active posture in the South Caucasus and back the Israel-Azerbaijan strategic partnership.

Taras Kuzio is based at the National University of Kyiv Mohyla Academy and he is a Non-Resident Fellow, Foreign Policy Institute, Johns Hopkins University. His latest book is Crisis in Russian Studies? Nationalism (Imperialism), Racism and War