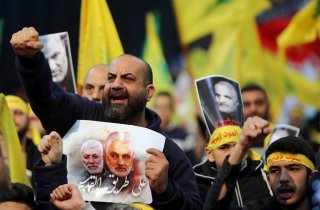 Hezbollah members sitting in an SUV were targeted by a drone strike on April 15 as tensions rise with Iran and Hezbollah in the Middle East. Lebanese officials accused Israel of the attack, suggesting it was an Israeli drone strike. It is the most recent of numerous incidents involving the killing of Hezbollah members in Lebanon and Syria. Lebanon has recently upped its rhetoric against Israel, complaining that Israel is violating Lebanese air space.

Tensions are rising in the region between Israel and Hezbollah and also between Israel and Iran, a conflict that has been percolating for years and comes as Iranian proxies continue to pressure U.S. forces in Iraq and Iran’s Islamic Revolutionary Guard Corps harasses U.S. naval warships in the Persian Gulf.

Israel recently conducted drills with the United States using F-35s and Jerusalem has rolled out a new reorganization of the IDF designed to improve its capabilities against Iran by dedicating a special headquarters unit to focus on the Iranian threat. Israel has been closely watching Iran’s use of cruise missiles and drones which were used against Saudi Arabia last year and also conducting airstrikes to interdict Iranian threats that flow through Syria. This includes Iran’s attempts to move precision-guided munitions to Hezbollah and to base drones and air defenses at Syria’s T-4 base.

Iran’s Tasnim news, which is close to the IRGC, claimed that Israel targeted a Hezbollah vehicle in the town of Jdeidat Yabous on the Lebanese border. About a forty-minute drive from Damascus in the pretty hill country, it is a key transit point for Syrians and Hezbollah has used it during the Syrian Civil War as a conduit to support the Syrian regime of Bashar al-Assad. Photos show a Jeep Grand Cherokee parked next to several stores and locals reported on social media they heard a UAV conducting surveillance prior to the strike. According to the Iranian reports, which are assumed to be based on Hezbollah sources, there were no casualties in the attack. Two missiles were fired at the SUV, with the second striking in the rear of the vehicle, spreading parts of the roof and doors around the nearby road leading to Lebanon.

Iran’s Tasnim notes that “earlier this month, a senior Hezbollah commander in southern Lebanon was killed apparently by agents working for Israel’s Mossad spy organization.” Israel does not comment on these reports. However, the attack on the Hezbollah SUV and the killing of Ali Mohammed Younes in southern Lebanon on April 5 appears linked to a third attack on February 27 that hit Imad Tawil, a Hezbollah officer involved in creating networks in southern Syria’s Quneitra area near the border with the Israeli-run Golan Heights.

Similar to the April 15 SUV attack, locals reported drone and aerial activity prior to the destruction of Tawil’s car.  Unlike the attack on the SUV, Tawil was killed. Jordan’s Al-Hadath says that Tawil was involved in setting up pro-Iranian operations in the Golan.

These three attacks all occurred within a relatively small triangle around 40 kilometers from one another. Tawil was killed near the village of Khadr overlooking the Golan, and just across the border in Southern Lebanon Younes was killed. Who was targeted in the third strike in Yabous? Al-Arabiya in Saudi Arabia says that Mustafa Mughniyeh, the son of the late Imad Mughniyeh, was the target. The elder Mughniyeh was Hezbollah’s second in command a key link between Hezbollah and IRGC Quds Force commander Qasem Soleimani. He was assassinated by a car bomb in Damascus in 2008 in the wake of the Israel-Hezbollah war of 2006. In a twist of irony, Soleimani bragged in an October 2019 interview about his adoration for Mughniyeh. Two months later Soleimani was killed in a U.S. airstrike in Baghdad.

Mughniyeh’s successors have not fared well either. His son, Jihad Mughniyeh, was killed in an Israeli airstrike from a helicopter in January 2015 near the Golan. An Iranian officer was also killed in that strike, illustrating the close relations between Iran and Hezbollah and their attempt to use Syria as a base for activity and attacks on Israel. Mustafa Mughniyeh, if he was the target of the April 15 airstrike, would be the third member of the Mughniyeh clan to be killed. He appears to have survived, but two missiles fired at his SUV would send a clear message to him, his links to Iran and his role in the Lebanon-Syria border region.

Hezbollah has been vocal in the past about retaliating for strikes in Lebanon but more reticent to retaliate for attacks in Syria. For instance, Israel says it has conducted more than 1,000 strikes on Iranian targets in Syria, including weapons transfers to Hezbollah. In August 2019 a new phase emerged after Israel not only killed a “killer drone” team of Hezbollah operatives in southern Syria, but Hezbollah alleged Israel also flew a drones into Beirut to target Hezbollah members. Hezbollah responded with anti-tank fire directed at northern Israel.

Israel has shifted back to strikes in Syria. Tensions with Iranian-backed Palestinian Islamic Jihad led to a strike Israel admitted in February 2020 against Islamic Jihad networks in Syria. Israel said it carried out an attack on a compound that was the “hub of Islamic Jihad’s activity in Syria.” Israel says that the group tests and researches weapons in Syria before transferring the know-how to the Gaza Strip. In addition, Israel was accused of trying to strike another Islamic Jihad leader named Akram al-Ajouri in Damascus in November 2019.

The overall trend is an increasing campaign against Hezbollah and Iranian-linked groups in Syria, which impacts their activities in Iraq and Lebanon. This campaign is called the "war between the wars" in Israel, basically a low-level conflict that takes place partly in the shadows that is designed to deter or degrade Iran’s ability to strike at Israel through its proxies in Syria and Lebanon. Israel’s attempts to chop off bits of Iran’s tentacles, such as attacking Palestinian Islamic Jihad leaders in Gaza in 2019 or striking Hezbollah drone teams in Syria, is an approach that Jerusalem has chosen for now. It has mixed results. Whoever was the target of the April 15 strike on the Syria-Lebanon border survived. So did Ajouri and also the target of the drone activity in Beirut in August 2019. Other alleged operations, such as the killing of Younes and Tawil send a message to Tehran and Hezbollah. It is a message they clearly receive because their media is not concerned about reporting the killings and accusing Israel.

The wider picture is that key parts of Hezbollah’s links to Iran have been killed. Soleimani, Mughniyeh and others were not merely commanders, but central key hubs for Iran based on close personal relationships. These relationships impacted Iran’s role in Iraq and underpin Hezbollah’s decision to play a greater role in Iraq now to fill the vacuum left by the death of Soleimani. The U.S. State Department accused Hezbollah’s Muhammad Kawtharani on April 10 of playing a key role now in Iraq alongside pro-Iranian groups there.

In the long term, the combination of strikes on individuals as well as infrastructure in Syria and neighboring states slow Iran’s transfer of weapons to Hezbollah, but it doesn’t solve the larger political problem. In March, Washington sent a V-22 Osprey to airlift Amer al-Fakhoury, a U.S. citizen of Lebanese origin, who had been detained in Lebanon. Hezbollah was furious, accusing Fakhoury of having worked with Israel in the 1980s. Hezbollah has used its influence over Lebanon’s government to go after those like Fakhoury and others who oppose its role. Overall, Iran’s political role and its allies and proxies in Syria and Iraq continue to increase their influence, a few airstrikes on SUVs and warehouses notwithstanding.