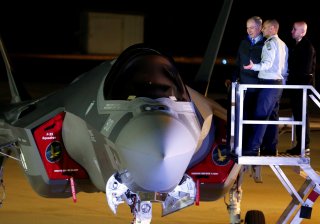 Israel’s F-35 Adir fighters conducted a training exercise called 'Enduring Lightning' over southern Israel amid the global pandemic. They were joined by the U.S. Air Force American F-35s, pairing the two countries' fifth-generation fighter capabilities at a time of tension in the region.

During the drill, they practiced “mitigating various strategic aerial and ground threats,” according to the Israeli Defense Forces. The last time Israel’s F-35s conducted an exercise with other countries was in November 2019 during Blue Flag which saw 40 jets and 800 personnel from four countries arrive in Israel.

Enduring Lightning was planned far in advance and the current pandemic caught both air forces by surprise. Nevertheless, it went forward to share lessons learned and prepare for the difficulties ahead against adversaries such as Iran. Israel opened a second F-35 squadron in January and may eventually receive up to 75 of the advanced stealth jets. Currently, it wants fifty of the hi-tech fighters that Israel modified to its own standards. Israel has a new multi-year plan named Momentum that foresees using more of the fighter’s technological capabilities, including using it to detect threats like cruise missiles. Israel has used its F-35s against adversaries since 2018.

The current exercise appeared to be postponed due to the pandemic until the IDF said it had concluded over the weekend. Last week a statement said it was supposed to end by Thursday, but it appears a temporary postponement pushed it ahead a day.

There was a concern for the health o the service members and the Israel Air Force says that it must continue to maintain full operational capabilities to fulfill its mission of protecting the skies in routine and emergency situations. “The IAF and the USAF teams engaged only in the air, and briefed and debriefed all parties via remote video conference.” No meetings were held on the ground to keep the social distancing mandated by guidelines to fight the coronavirus. Israel says the use of F-35s by both countries together in southern Israel illustrates the close ties between Washington and Jerusalem. It expands the shared knowledge of the jet’s advanced capabilities.

The F-35 Adirs used in the drill came from the 140 Golden Eagle squadron and practiced with the USAF’s 34th fighter squadron. Nachshon Gulfstream G-500 aircraft were also used. The Gulfstream is used to gather signals intelligence and for radar and control missions. An IAF officer said that "this will be the second time we'll fly alongside an American F-35. We aspire to stay as connected as possible to countries involved in its development project, and training with the Americans presents an excellent opportunity to do so since they have a lot of knowledge and expertise on the matter…The forces flew in two formations of four, and communicated directly as opposed to through an indirect channel.”

The USAF 34th Fighter Squadron previously saw deployment at Kadena Air Base in Japan in 2017 where it was among the first operational tasking of F-35As. In November 2019 elements of the 34th Fighter Squadron flew to Al Dhafra Air Base in the United Arab Emirates from Hill Air Base in Utah. Like other parts of the U.S. military, airmen who are involved with F-35s are also affected by the stop movement orders that have been put in place to combat the spread of the coronavirus. There are few exceptions to the March 25 order and it affects exercise and deployments. It appears Enduring Lightning was able to go forward despite the difficulties because of the importance placed on learning from the capabilities of the F-35 and preparing for conflict in the region.