Israeli F-35s Could Soon Be Taking On Iran's Cruise Missiles 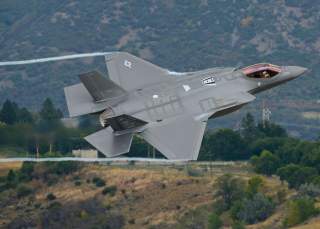 Key point: Israeli F-35s are operating in the region and Israel’s Prime Minister Benjamin Netanyahu has warned Iran that the planes can reach whatever targets they need to.

The F-35 radar is the most advanced for fighter jets, according to F-35 developer Lockheed Martin. “It enables the F-35 to be capable of identifying and intercepting airborne threats flying at a low altitude and at high speeds,” a company spokesman said on December 18. That’s important considering the emerging threats Israel now faces from Iran and Iranian-backed groups such as Hezbollah  which are seeking precision guidance for their rocket arsenal. Iran is accused of using cruise missiles to attack Saudi Arabia in September. The F-35’s radar can play a role in neutralizing these kinds of threats.

Gary North, vice-president for customer requirements for Lockheed Martin says that the F-35 AN/APG-81 AESA radar can enable the interception of low altitude airborne threats. The radar is a key element of the F-35 supplied by Northrop Grumman. It is an active electronically scanned array that provides situational awareness and a view of the battlespace. “The electronically scanned nature of the AESA allows it to quickly scan any direction, compared to a mechanically scanned radar,” Avionics International notes. It sponges up data and enables the  F-35 to perform its mission in combination with all the other technology and data links that fifth-generation militaries are using today. Missile Defense Review noted in early 2019 that the F-35  can “track and destroy adversary cruise missiles” and pointed out the aircraft will have other missile defense capabilities.

Israel modified its F-35 Adir to confront unique threats the country faces and to meet its needs. Low altitude and precision-guided missiles are one of the threats Israel deals with, although scanning for such threats is not usually the job of warplanes like the F-35. Israel has a sophisticated multi-layered air defense, such as the Iron Dome and David’s Sling that it uses to confront rocket threats. In the last two years, more than 2,600 rockets have been fired from Gaza at Israel and Iranian IRGC networks in Syria have fired rockets and attacked Israel with drones at least five times since February 2018.

Israel’s F-35s have been operational since December 2017 and by the summer of 2019, it had received 16 of the 50 it will receive by 2024. Israel has been supplanting the F-35s it received with its other warplanes, including the F-15s which Israel has modified in the past, which also has advanced radar. These include the F-15Ds and F-15Is Israel has in its air force. Indigenous upgrades have always been Israel’s forte. It upgraded its older F-15s in the past, concentrating on better radar, data link and electronic warfare suites. Spotting low-flying cruise missiles has been an issue that radar designers have sought to confront over the last decades. However, if the F-35 is used against cruise missiles by itself it might need to carry munitions externally that negate its stealth externally, one report indicates; an added reason that using it in combination with other aircraft or systems can maximize the capabilities of each.

A paper on the 2019 Military Balance by the International Institute for Strategic Studies noted that UAVs with reduced radar-signature and “precision-guided munitions and land-attack cruise missiles (LACMs),” are one of many challenges for the “traditional target set,” countries face. Israel is taking note of the threat, especially amid the proliferation of Iran’s cruise missiles and Tehran’s frequent military drills with both cruise missiles, ballistic missiles and drones. Iranian designed cruise missiles and loitering munitions, often called suicide drones, have been used by the Houthi rebels against Saudi Arabia. Iran has tested an anti-ship cruise missile and claims one of its cruise missiles has a 2,000 km range.

According to an investigation of the Abqaiq attack Washington has assessed that the drones and cruise missiles came from the north of Abqaiq, traveling some 200km northwest of the target. Israel’s challenge in the face of similar threats is a problem that the US has looked at in the past. In 2015 the Pentagon was reportedly seeking a cruise missile shield that would include radar that enables F-16s to shoot down the missiles. The F-35 now can also detect the infrared signature of missiles, including ballistic missiles. Its full capabilities, or whether using it as part of a  missile defense system is worthwhile, is still being debated in the U.S.

Israel’s F-35 is operating in the region and Israel’s Prime Minister Benjamin Netanyahu has warned Iran that the planes can reach whatever targets they need to. A photo of an F-35 flying over Beirut was released in 2018. Israel’s Air  Force has been increasingly active against Iranian forces in Syria in recent months. Israel’s new Defense Minister Naftali Bennett has said he will turn Syria into Iran’s Vietnam, and Iran’s forces will sink in the sands of Syria’s desert. So far Iran hasn’t fired precision munitions or cruise missiles from Syria, but reports indicate that it is trafficking ballistic missiles to Iraq and aiding Hezbollah to upgrade the precision of its missiles.

Confronting this multiplicity of threats is a challenge Israel has confronted in the last years. If it has to go up against a complex Iranian attack the F-35 will play a key role.