How Iraq Is Balancing the Saudi-Iran Rivalry 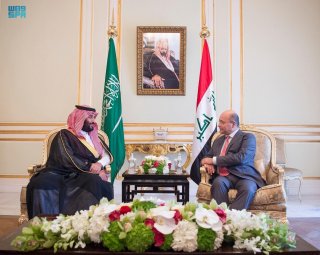 On April 26, Iranian Foreign Minister Mohammad Javad Zarif arrived in Baghdad to initiate a series of official talks concerning the future of relations between the two countries. Three weeks prior to this visit, the Iraqi government hosted senior Iranian and Saudi officials in an effort to ease tensions between the regional adversaries. These outward displays of reconciliation come amidst shifting relations between the United States, Iraq, Iran, and Saudi Arabia.

Saudi Arabia and Iran have remained in an active state of tug-of-war since the two countries officially cut ties in 2016. The ongoing power struggle disjoining Riyadh and Tehran, intensified by the Sunni-Shiite divide, almost exclusively plays out vis-à-vis proxy warfare.

In Yemen, the devastating civil conflict that has ensnared the country escalated when Iran stepped up its support for the Houthi rebels and their weapons arsenal. Since the onset of 2021, the Houthis have intensified the scope and scale of attacks targeting Saudi Arabia, recently compelling U.S. Secretary of State Antony Blinken to ask the international community “why the Houthis are seeking a military solution to the conflict…despite the tremendous humanitarian consequences” on Twitter.

Despite Houthi escalations, the United States has retreated from the Yemen conflict as the Biden administration prioritizes a “recalibration” of ties with the Saudi Kingdom. As a candidate, President Biden vowed to punish Riyadh for the 2018 murder of journalist Jamal Khashoggi as well as its role in the Yemen civil war. By March, the United States terminated its support for the internationally-recognized government fighting the Iran-backed rebels and reversed the Trump-era decision that designated the Houthis a terrorist organization. The Biden administration has made its perception of the Saudi “pariah” state abundantly clear, and Riyadh is eager to overturn that.

As the Houthis have stepped up attacks targeting Riyadh, Iranian-backed militias in Iraq have followed suit. Since the inauguration of President Biden, U.S. diplomatic and military sites in Baghdad’s Green Zone have been the target of twenty-three attacks. Iranian militias in Iraq function under the umbrella organization labeled the Popular Mobilization Forces (PMF). Although the PMF initially materialized to participate in the fight against ISIS in 2014, some offshoots have since expanded to openly defy Iraqi law and support the interests of Tehran.

Tensions between the United States and Iran have played out on Iraqi territory since the U.S.-led targeted killing of Iranian Gen. Qassem Soleimani in January 2020. Recently, Iranian militias have demanded that the United States pull out its remaining 2,500 troops on the ground in Iraq in exchange for a cessation of rocket attacks. The Iraqi government, led by Prime Minister Mustafa al-Kadhimi, has struggled to balance the rising U.S.-Iranian tensions. While maintaining good relations with its neighbor and top energy provider is strategic, Kadhimi also sees the potential a stronger U.S.-Iraq and Iraq-Gulf relationship could deliver.

In April, Iraqi officials met with their Saudi counterparts to discuss prospects for spheres of cooperation. During these discussions, Iraq and Saudi Arabia signed five agreements improving the countries’ economic ties. The kingdom’s investments in Iraq are expected to rise from $2 billion to $10 billion riyals down the road. Tehran views economic progress between Riyadh and Baghdad as a threat. Iranian exports make up between 30-40 percent of Iraq’s power supply and natural gas. If Saudi Arabia and its Gulf neighbors can provide energy and resources to Iraq’s economy, Baghdad’s dependency on Iranian energy would be greatly reduced.

As the upcoming indirect nuclear talks between the United States and Iran approach, Tehran will seek to leverage its negotiating position. By agreeing to participate in the Iraq-mediated discussions with Saudi Arabia, Tehran aims to signal its commitment to long-term peace and stability in the region. Although the Saudi-Iran talks are significant, prospects for real change and reconciliation between the rival countries are low.