How Irish Fishermen Made the Russian Navy Back Down 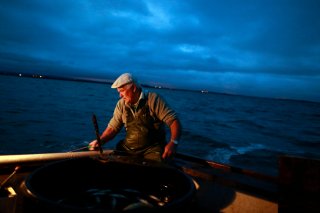 In a tale worthy of a movie, Moscow announced that it would relocate naval exercises away from the coast of Ireland after facing significant pushback from Irish fishermen. While any future movie will likely take a fair share of artistic license, the true story is still remarkable.

Arguing that the area's unique marine wildlife could be put in harm's way, Irish officials previously declared that the exercises were neither welcome nor wanted. However, Dublin remained unable to convince the Russian government to relocate the drills. In fact, Moscow took quite a hard line on the matter.

"There is nothing to be disturbed, concerned, or anguished about and I have extensively explained that to our Irish colleagues," Russia's ambassador to Ireland, Yuri Filatov, said last week to reporters.

Despite Filatov’s claims, the exercise threatened the livelihood of Ireland's fishermen, who reportedly stood to lose one million tons of fish. And when Dublin seemed unable, or unwilling, to do something, Patrick Murphy, the chief executive of the Irish South and West Fish Producers Organisation, decided to step in.

"This is the livelihoods of fishermen and fishing families all around the coastline here," Murphy told RTE radio. "It's our waters. Can you imagine if the Russians were applying to go onto the mainland of Ireland to go launching rockets, how far would they get with that?"

Murphy met directly with Filatov last week to make the fishermen's case, warning that the fishermen planned on fishing regardless of the naval activities.

"Our boats will be going out to that area on the first of February to go fishing," Murphy told Politico on January 25. "When one boat needs to return to port, another will head out so there is a continuous presence on the water. If that is in proximity to where the [military] exercise is going, we are expecting that the Russian naval services abide by the anti-collision regulations."

Recognizing that the constant presence of Irish fishing boats would certainly have impacted the exercises, Russia announced it would relocate the exercises last Saturday.

"In response to the requests from the Irish government as well as from the Irish South and West Fish Producer’s Organization, the Minister of Defense of the Russian Federation Sergey Shoigu has made a decision, as a gesture of goodwill, to relocate the exercises by the Russian Navy … with the aim not to hinder fishing activities by the Irish vessels in the traditional fishing areas," the Russian Embassy in Dublin said in a statement.

The proposed exercise off the coast of Ireland was just one of a number of Russian naval drills planned for 2022. According to a report from TASS, the drills will take place in the seas adjacent to Russian territory and other operationally important areas. Separate drills will run in the Mediterranean, North, and Okhotsk Seas, as well as in the northeastern Atlantic and Pacific Oceans. In total, the exercises will involve more than 140 warships and support vessels, more than sixty aircraft, 1,000 items of military hardware, and about 10,000 troops.

While it is unlikely that Russia will be so willing to relocate future exercises, it seems that the Irish sailors were truly David to Moscow's Goliath.

As DefenseOne reported, "The Irish fishermen didn't just humiliate Moscow: they also put Western capitals' deterrence efforts to shame. And they did so by announcing asymmetric deterrence. The Irishmen would clearly not been able to sail to key Russian fishing waters to take revenge by harming fish there, and doing so would have at any rate been provocative. But they could go about their peaceful business in the Irish EEZ in such large numbers that the Russians would struggle to carry out their exercise."

If only those fishermen could stop Russia's buildup of military forces on its border with Ukraine.