Will Europe Meet the Ukraine Test? 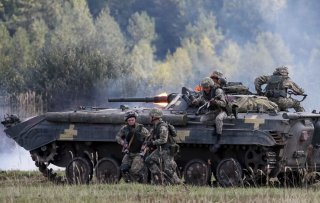 The aspiration of a “Europe whole, free and at peace” is being put to the test in Ukraine. And right now, the Europeans seem far from earning a passing grade.

Vladimir Putin has long used Russian-seized territory in Ukraine, Georgia, and Moldova as launching pads to destabilize European solidarity and threaten the security of neighboring states, NATO, and the European Union. In the past few weeks, Putin has upped the pressure, threatening an attack on Ukraine and making impossible demands on NATO.

It would be unfair to say that Europe has done nothing in response. The G7 foreign ministers (which include four European powers: France, Italy, Germany, and the United Kingdom) threatened retaliation if the Kremlin orders a military invasion of Ukraine. “Russia should be in no doubt that further military aggression against Ukraine would have massive consequences and severe cost in response,” they declared. Further, the EU imposed sanctions on the Wagner Group, a Russian paramilitary organization whose fighters operate in Ukraine, among other hotspots. Further, no European country has signaled support for Putin’s outrageous demands, which include an end to NATO enlargement.

What has not been forthcoming, however, is anything like a coherent response to Putin’s bullying. Europeans do not share a resolute and clear approach on the Ukrainian issue.

Berlin’s position is ambiguous. Some of the political parties in the coalition government led by the new chancellor, Olaf Scholz, want a tougher stance on Russia. For example, CDU leader Friedrich Merz is calling for a harder line toward Putin. Yet German foreign policy looks as feckless as ever.

Ukrainian defense minister Oleksii Reznikov fumed in the Financial Times, “They are still building the Nord Stream 2 pipeline.” Ukraine, as well as several other Central European countries, argue the Russo-German pipeline would give Putin even greater power to blackmail nations by withholding energy supplies. The new German government, however, remains divided over whether to let the pipeline go into operation.

Germany’s position on arms sales has also been a source of frustration. Reznikov blamed Germany for blocking the purchase of defensive weapons through NATO. “It is very unfair,” he complained.  When asked about this in an interview with Deutsche Presse-Agentur, the new German foreign minister, Annalena Baerbock, dodged the issue. “Further military escalation wouldn’t bring Ukraine greater security,” she argued. It was a nonsensical answer. After Russia massed over 100,000 troops on Ukraine’s border, it strains credulity to argue that helping Ukrainians prepare to defend themselves is an escalation.

The German foreign minister will be in the United States this week. It remains to be seen if Berlin has anything more resolute to bring to the table.

While Berlin meanders, Brussels looks no better. During a recent phone conversation with the Ukrainian foreign minister Dmytro Kuleba, the High Representative of the European Union for Foreign Affairs Josep Borrell called for the full implementation of the Minsk agreements (the 2015 accords which were supposed to resolve the conflict between Russia and Ukraine). This is just magical diplomatic thinking. The accords are a geopolitical dead letter. Borrell might as well have tapped his heels three times and said, “There is no place like home.”

Paris, for its part, oscillates between harsh threats and pleas for dialogue.

Rome is mostly worried about energy supplies. In a recent press conference, Italian prime minister Mario Draghi stated, “If we want to adopt sanctions that also include gas, are we really capable of doing so? Are we strong enough? Is it the right time? Clearly the answer is no.”

London has been the most forward-leaning on warning Putin of severe consequences. That said, British defense secretary Ben Wallace declared in an interview, “It is highly unlikely that Britain or its allies will send troops to defend Ukraine if it is invaded by neighbouring Russia.”

Even Ukraine’s Central European neighbors, though deeply concerned about the threat of an attack on the country, seem bereft of constructive actions that could be taken to forestall a Russian attack.

The stiffest pushback has come from Northern Europe, where the Finnish prime minister Sanna Marin proclaimed boldly in response to Putin’s demands for end to NATO expansion that “Finland retains the option of applying for NATO membership.”

The lack of a unified European effort is a serious concern. The challenge in dealing with the Ukraine crisis is not “deescalating” the situation. Putin has no interest in de-escalation. He is only interested in extracting the maximum benefit he can get from the crisis he created. The West must focus on supporting the sovereignty of Ukraine and the capacity of Ukrainians to defend themselves. This will require taking action to punish Putin for threatening Ukraine, not just proposing to respond after an attack is underway.

Further, Europeans have to realize this isn’t about just Ukraine. Ukraine is not a distant problem. In Putin’s eyes, Ukraine is a means to ends to ensure that Europe is never “whole, free, and at peace.”

Putin views security as a zero-sum game: He can only win if others lose. Ukraine is a follow-on from the recent crisis with Belarus, when Minsk weaponized illegal migration from the Middle East to put Ukraine, Poland, and the entire European Union in turmoil. The Belarusian migration crisis was part of the same larger strategy, through which Putin aims to weaken the Western front, betting on divided allies, an irresolute Brussels, and cooling of transatlantic relations with Washington after the Afghanistan debacle.

For the West, there is only one right answer: strong support for Ukraine, immediately revitalizing and expanding NATO’s defensive capacity, and rapidly building up European energy security. Putin fears and respects strength. He exploits weakness. Europe must cease its dithering and give him what he fears, not what he wants.