Beyond Ukraine: How to Revive the Vision of a Europe ‘Whole and at Peace’ 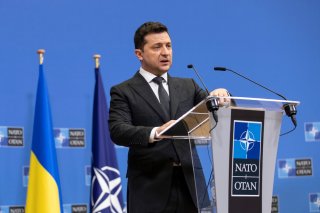 As the Ukrainian crisis swells, two fundamental questions arise. Nearly a quarter-century after the tensions of the Cold War ended, how could it be that the peace of Europe is again fundamentally imperiled? And, beyond the immediate and urgent question of how the worst is to be averted, the larger neglected question is: what is necessary if the desiccated hopes of a Europe “whole and at peace,” the rosy expectation of leaders as the Soviet Union crumbled, are to be revived?

The answer to the first basic question traces back to the “original sin”: NATO’s expansion eastward, but not only for the reason argued at the time by George Kennan and Paul Nitze—men who agreed on little else—that the United States and its NATO partners would not like the Russia that NATO’s encroachment would produce. Equally important was Russian behavior that, from the beginning, intensified its new neighbors’ eagerness to be brought under the NATO umbrella. The tragedy of the day is that the two sides of the original sin live on. Three weeks ago, NATO secretary general Jens Stoltenberg publicly reassured Ukrainian president Volodymyr Zelenskyy that the 2008 Bucharest summit promise that Ukraine will someday be admitted to NATO still stands. And Russian intimidation of its neighbors—never more brazen than the military buildup on the Ukrainian border—makes them ever more determined to bring NATO closer with or without a chance for full membership.

Following the collapse of the Soviet Union, the alternative that Western and Russian leaders promised to create, a Euro-Atlantic security community stretching from “Vancouver to Vladivostok,” exceeded their creativity and, more important, their political will. Amidst the debris of a fallen empire, it may have been unrealistic to expect a psychologically wounded Russia to reassure rather than strong-arm its unwelcome new neighbors, and it may have been natural for a self-satisfied West to turn its attention to new preoccupations. The price paid, however, had become evident a decade later when efforts like the Euro-Atlantic Security Initiative, a commission of senior ex-officials from the United States, Europe, and Russia, surveyed the damage and issued its appeal. The report’s counsel is as apt today, if not more so, than when offered in 2012. The price paid for the indifference to it should also remind contemporary leaders of the price they will pay if once again lessons are not learned.

Answering the second basic question is harder because it entails dealing with a tangled three-level challenge. The challenge resembles a Russian matryoshka doll. The outer doll, the most fundamental level of the challenge, is in finding a more durable, balanced, and mutually acceptable architecture for European security. The middle doll requires identifying a path to a workable resolution of the Ukrainian question. The small explosive third doll—explosive because it could blow up the entire doll—urgently demands escaping the current crisis.

If there is good news, it is that the parties appear to have been jolted back to recognizing that the current crisis needs to be addressed in the larger European security context. The problem is that they have long ago forgotten how to do this and what rudimentary thoughts they have appear to be far apart. Moreover, progress on the second level is frozen and little suggests that they know how to unfreeze it. That said, at the third level, the current tension could be defused with two relatively simple steps: first, the Russian side, as a token gesture, would continue, if true, to return back to its home bases some of the upwards of a 100 tactical battalion groups that it has moved forward to the Yelnya, Boyevo, and Novoozernoye deployment areas, and NATO members would scale back military exercises near the Russian border. Second, they would, as now appears quite possible, engage in a serious dialogue over mitigating the concerns on each side that have led to the current crisis.

But that is where the matryoshka metaphor breaks down, because the three levels are not separate. They are interlocking dolls. Defusing current tensions by simply discussing the concerns motivating the crisis without effective mutual concessions will solve little and guarantee the prospect of renewed trouble in the future. One needs to wrestle with the obstacles where the third and second levels are fused. So, think in terms of a daisy chain. Avoiding a Russian invasion of Ukraine and the wreckage that will impose on an already deeply stressed Russia-West relationship is an immediate and urgent goal. But taking minimal steps to defuse this immediate crisis will run headlong into elements enmeshed in the hard intractable problems surrounding a resolution of the larger Ukrainian question.

The linkage is in the dual demands of Russia at the heart of the current crisis: no Ukraine in NATO and, short of that, no NATO in Ukraine, both of which have no reasonable answer without movement on the larger question. NATO will never agree to foreswear admitting Ukraine to the alliance, let alone in a legal form. But it might be imagined that it would declare a ten or fifteen-year moratorium on considering the question. On the second demand, the United States and its NATO allies might make plain that they do not intend to turn Ukraine into a NATO bridgehead by pledging that their training facilities in Ukraine will not be converted into operational bases. Moreover, they could offer limits to the types of arms they will supply, if, in turn, Russia promises to thin out its forces on the Ukrainian border and withdraw Russian soldiers and officers supporting the First (Donetsk) and Second (Luhansk) Army Corps.

None of this, however, can happen until Moscow feels confident that the Ukrainian government will not seize the opportunity that these steps would create to militarily crush the separatist governments and not until Kyiv and its Western supporters trust that Russia no longer seeks to exploit the ongoing military instability in Donbas to constantly wrong-foot them. For that, the seven-year Ukrainian stalemate must be broken. Breaking it won’t be possible within the current Minsk framework. Its core requirements and their sequencing—local elections under special provision for local autonomy, restored Ukrainian control over its border with Russia, and then constitutional reform guaranteeing the rebellious regions a special status—have not been and will not be attainable.

Elements of the Minsk II protocol are important and doable, such as solidifying the ceasefire line, introducing neutral peacekeeping forces, and providing for humanitarian assistance. But their pursuit should be woven into a larger goal—that of normalizing Russian-Ukrainian relations. Normalization would focus on assuring Ukrainian access to the Sea of Azov through the Kerch Strait, establishing confidence building measures (CBMs) that give transparency and predictability to each side’s military actions, facilitating rather than blocking water supplies to Crimea, repairing desirable industrial and economic ties that were severed over the last several years, dampening the information war each conducts against the other, and relinking multiple agencies of the two governments in dialogues aimed at finding areas of potential cooperation. The parts of the Minsk agreement mentioned above should figure both as a necessary component and a potential beneficiary of the process, but not as its precondition.

Only the naïve, however, would think that in their present mood the Russian and Ukrainian leaderships have any desire to move in this direction, so the role of the United States and its European allies is critical. The United States and Europe should redirect their stale sanctions regime on Russia toward encouraging these steps and rewarding Russia and Ukraine when they make progress. Aid to Ukraine should be tied toward not only fostering domestic reform and bolstering its defense, but toward inducing a readiness to reciprocate any constructive steps taken by Russia.

Here, however, one arrives at the top of the daisy chain. Ultimately, a normalized Russian-Ukrainian relationship that is at peace and resolves the status of the Donbas depends on a recrafted European security structure and dynamic. A Euro-Atlantic security community from “Vancouver to Vladivostok” is a faded fantasy, but a momentum shift away from a remilitarized confrontation cutting through Europe’s most unstable regions from the Arctic to the Black Sea should not be beyond imagination. Nor should other steps making all of Europe safer and less tension-filled be out of reach. On the first front, a return to some form of arms control limiting certain types of armaments and units forward-deployed; a reinforced Vienna Document constraining the size and nature of exercises; a reaffirmation of NATO’s pledge that it has “no intention, no plans, and no reason” to deploy nuclear weapons on the territory of any new NATO member; and a prohibition on deploying intermediate-range ballistic missiles (IRBMs) in Europe would increase the security of both sides as well as the countries caught between.

Information warfare, including cyber interference in the politics and into the infrastructure of other countries, which is both a cause and consequence of poisoned relations, can and should be curtailed. Focusing on de-politicizing energy security in Europe and on measures protecting the legitimate interests of both suppliers and consumers as well as transporters, complicated as this may be, makes more sense than continuing to treat this as a battleground. And the Arctic should be approached as an opportunity together to enhance mutual security, equitable access to resources, and, above all, effective measures to mitigate the damage from climate change.