Can the Biden-Putin Call Really Avert War Over Ukraine? 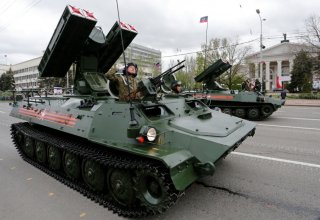 As military tensions simmer between Russia and Ukraine, the West is bracing for three rounds of high-stakes negotiations with the Kremlin in early January.

President Joe Biden and Russian president Vladimir Putin spoke over the phone on Thursday. The tenor of the call can only be described as stark. Biden, the White House said, “urged Russia to de-escalate tensions with Ukraine.” Putin did not pull his punches. Economic sanctions, he warned, might well issue in a “complete rupture” of relations between Washington and Moscow. This is something that did not occur even during the most frigid years of the Cold War. Putin’s message to Biden could hardly be more clear. Russia will not be satisfied with cosmetic concessions.

What looms in coming weeks? “The goal is to continue discussing the issues that were on the agenda of their recent video call,” Kremlin spokesman Dmitry Peskov told reporters on Thursday. “Besides, they will discuss a number of pressing issues related to the talks that will be held on January 10-12. Peskov added that there “will be no public part” to the conversation, suggesting that neither side intends to release a summary. When asked why the phone conversation is being held so late in the day, Peskov said, “there is no problem, you know that the late hours have never been a problem for the Russian president, particularly because oftentimes, he continues to actively work this late at night.”

The U.S. Air Force flew a spy plane over eastern Ukraine to assess the military situation on the ground in the run-up to the conversation, a source told CNN. Biden, speaking from his Delaware home, is expected to reassure the Russian leader that there are diplomatic pathways to de-escalation in Ukraine. “I think both leaders believe that there is genuine value in direct leader-to-leader engagement, that we are in a moment of crisis and have been for some weeks now given the Russian buildup,” said a senior Biden administration official, according to The Washington Post. A top administration official told reporters that Biden likewise plans to remind Putin of the consequences that will befall the Kremlin in the event of a Ukraine invasion scenario, including withering economic sanctions and further military aid to Ukraine. The White House has ruled out unilaterally sending U.S. troops to defend Ukraine from a possible Russian offensive.

The conversation between Putin and Biden will serve as a prelude to bilateral negotiations in Geneva, Switzerland, on January 10. The U.S. delegation will be led by U.S. deputy secretary of state Wendy Sherman; the Russian side will reportedly be helmed by Sherman’s Kremlin counterpart, Deputy Minister Sergei Ryabkov. Putin and Biden are not expected to attend the coming talks in person. U.S. Department of State spokesman Ned Price confirmed earlier this week that the NATO-Russia Council will convene on January 12, followed by a meeting of the Organization for Security and Co-operation in Europe on January 13. “We will surely put our concerns on the table. I imagine the Russians will do the same,” said Price. “There will be areas where we can make progress, areas I’m sure where we will disagree.”

The upcoming negotiations were preceded by a draft document, published by the Russian Foreign Ministry earlier in December, containing sweeping security demands from what Ryabkov referred to as the “collective West.” Moscow’s decision to publish the demands drew the ire of top Biden administration officials, who have stressed in past weeks that any talks between Russia and the West will be more productive if conducted in private. The document, which is split into two separate binding agreements with the United States and NATO, calls for legal guarantees against eastward NATO expansion and prohibitions on the deployment of foreign forces on the territories of post-Soviet states. There is currently no indication that NATO is laying concrete plans to induct Ukraine; At the same time, top NATO officials have repeatedly ruled out the idea of legally prohibiting Kiev from seeking membership in the alliance.

The upcoming talks were prompted by what Western and Ukrainian intelligence sources described as the dramatic buildup of Russian forces, with recent estimates varying from 80,000-100,000 troops, on Russia’s side of the Russian-Ukrainian border over the course of November and December. Military experts have warned that the recent movements of Russian troops near Ukraine are out-of-cycle, not premised on any concrete military threats from Kiev, and inconsistent with the force deployment and distribution patterns expected from regular military drills.

The Kremlin has stressed that it expects swift, substantive results from the coming summits, with Putin saying earlier that Moscow will not allow itself to be “chatted up” or “bogged down in some sort of swamp.” Top Kremlin officials have suggested, without elaborating on specific measures, that the West’s rejection of Russia’s demands will prompt a significant military response. Russian deputy foreign minister Alexander Grushko said in a prior interview that the West can either “take seriously what we have put on the table,” or “face a military-technical alternative.” The head of Ukraine’s defense intelligence agency told the Military Times last month that Russia is preparing to attack Ukraine by late January or early February. According to Russian military experts, other forms of retaliation can possibly involve the proliferation of Russian strategic missile systems to allied states including Belarus and Serbia. “A lack of progress in the direction of a political-diplomatic solution to this problem will lead to a military and military-technical response on our part,” said Ryabkov.