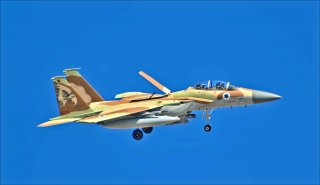 Israel is building some of the most sophisticated special mission intelligence gathering aircraft globally, according to Israel Aerospace Industries. The Israeli company recently announced a new contract for a $350 million aircraft to be outfitted for a European country with IAI’s ELTA Systems. These aircraft are unique for intelligence gathering and are key to managing the modern battlefield countries find themselves competing in. However the specific components, capabilities and elements of these sophisticated aircraft are often sensitive information or shrouded in secrecy.

Israel’s IAI and its active electronically scanned array (AESA) radars built by its subsidiary ELTA have been innovative for decades. Instead of a rotating radar, these phased arrays consist of smaller radars conformally mounted on an aircraft, giving it a protruding nose or what look like bloated sides that are actually radars. They can be electronically steered in a variety of directions. Early use of these systems, such as the EL/M-2075 for the Boeing 707 and EL/W-2090 for an IL-76 in India in the 1990s and early 2000s put IAI at the leading edge of Israel’s move into developing its own airborne early warning (AEW) aircraft. Israel outfitted both the Boeing 707 Phalcon and Gulfstream G550 between 1993 and 2010. The G550s, dubbed Eitam in the Israeli Air Forces, were incorporated into the Nahshon squadron 122 at Nevatim air base in the Negev. Israel currently operates a highly sophisticated air force utilizing its own version of the F-35 which it has flown alongside the United States in recent exercises. During the November 2019 edition of Blue Flag Israel flew its Gulfstream G550 aerial intelligence plane as part of the drill.

Israel’s IAI, the country’s main aviation and aerospace manufacturer, produces its special mission aircraft of air-to-air, air-to-ground, as well as air-to-sea intelligence coverage, capable of carrying out what it calls Intelligence, Surveillance, Target Acquisition, and Reconnaissance (ISTAR) missions. These include aircraft packed with sensors for maritime patrol, electro-optical, ELINT and COMINT missions.

There are four basic types of these IAI configurations. An airborne early warning and control aircraft, a multi-mission air to ground aircraft, maritime patrol, and SIGINT and electronic warfare aircraft. The configurations give an aircraft the ability to detect and identify threats at a long distance, or to aid troops on the ground to track moving objects and relay information. For maritime missions the aircraft can track vessels or aid in anti-submarine operations, and also for signals intelligence, tracking signals using specialized sensors.

Israel’s IAI currently works with several airplane manufacturers to upgrade aircraft for these operations, including Dassault, Bombardier, Gulfstream, and Embraer. Despite coronavirus, Israel’s military and its defense technology relationships with countries abroad must continue, the companies say. New technologies are changing some of what these aircraft detect or where sensors can be put. For instance, UAVs offer a promising platform for some missions but they are also vulnerable to air defense, as the Iranian shootdown of the U.S. Global Hawk in 2019 illustrated. At the same time detection of UAVs and drone swarms is becoming more important. U.S. CENTCOM head Kenneth McKenzie warned about drone swarms during a recent presentation.

Israel’s special mission aircraft form part of the “electronic order of battle” which proves increasingly essential on a digitized battlefield. This digitization is part of Israel’s overall five year plan for what it calls its Momentum plan of increasing the IDF’s tech-savvy abilities and pushing real-time intelligence to smaller frontline units. Technology historically gave Israel an edge over enemies. This harkens back to the 1980s when Israel decimated the Syrian air force and air defense in 1982 battles over Lebanon with the assistance of better airborne technology, such as the E-2C Hawkeye, an airborne radar platform that helped coordinate the battle below. The Boeing 707 Israel eventually equipped had AESA antennas ten by two meters in length along the side. Eventually Israel developed the Special Electronic Mission Aircraft using the Gulfstream model.

Different challenges are posed by environments for these aircraft. On the ground using Synthetic Aperture Radar and Ground Moving Target Indicators for GPS-guided munitions one has to differentiate between moving targets and things like trees blowing in the wind, whereas on the water the issue is trying to find a periscope amid the waves. A combination of electro-optical means, basically visual scanning, and radar, is used. This combines with data from information on friendly ships (Identification of Friend of Foe-IFF) and Automatic Identification Systems (AIS), a transponder tracking system, is used. ELTA calls its maritime configuration ELI-3360 for Bombardier Global 6500 or similar business jet platforms, converted for intelligence or patrol use. According to various reports, ELTA also equipped P-3 aircraft, Airbus C-295, C-235, Bombardier Dash-8, Dornier 228, Eurocopter AS-365, and IAI Herons. Many of the reports on Israel’s customers for these aircraft are either speculative or classified.

Israel has sought out customers for its special mission aircraft from Europe to Asia, including in India and at the Singapore Air Show. The aircraft have also now gone through several generations from their introduction two decades ago. But strategic assets like these kinds of aircraft represent a major investment for a military and there are other major players in the field. Nevertheless budgets in this arena are growing because of the range of threats and the congested space that needs to be monitored. In June 2019, in Paris IAI and Embraer signed an agreement to develop the P600 Praetor with ELTA’s fourth generation Digital Active Electronically Scanned Array.

“As part of IAI’s strategy, we are bolstering our presence in Europe for leveraging our business and extending cooperation,” Gideon Landa, ELTA’s vice-president and general manager of airborne systems said on June 8. “IAI’s Special Mission Aircraft offer advanced and unique technological capabilities to meet a broad range of most demanding intelligence missions,” he noted.