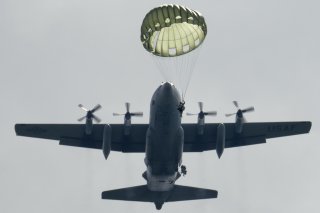 Lockheed Martin’s famous secretive Skunk Works unit is known for its role in giving life to the U-2 Dragon Lady spy plane, F-22 Raptor and first-ever stealth aircraft—the F-117 Nighthawk. But there are lesser-known but impactful programs tied to the special unit such as the C-130 Hercules.

The C-130 cargo airplane first emerged decades ago and is continuing to improve performance through a wide range of ongoing upgrades. The aircraft is also a key example of Air Force efforts to redefine, expand or enlarge mission scope for many of its existing platforms through innovations, software enhancements and other new technological adaptations. This is one of the reasons why the C-130 represents essential elements of the strategy inspiring Lockheed’s secret weapons facility, Skunk Works. The strategy includes seeking to sustain close connectivity with warfighting needs, threats and requirements while pursuing the rapid identification and insertion of new technologies quickly as they become available.

The C-130 Hercules is a prime example of the mandate by which Skunk Works abides, which is to maintain close connectivity between promising, deployable innovations and emerging warzone needs. The secretive Lockheed unit maintains ongoing involvement in enhancements to the 1950s-era aircraft which may well fly for more than eighty years. The cargo airplane has received new propeller technologies, radios, glass cockpit touchscreen displays, digital avionics, collision avoidance technology and reinforced “wing boxes” among other things. The airframes of the airplanes, which remain viable and reliable, have in recent years been receiving upgraded center-wing boxes to connect the wings to the fuselage.

To determine the point at which a C-130 Hercules needs upgrades and maintenance to sustain service life, the Air Force relies upon a metric known as “equivalent baseline hours.” Service officials believe there is need for variation with this metric because wear and tear on a C-130 Hercules can vary depending upon a range of factors such as mission op tempo, areas where it served in terms of terrain, weather conditions and altitude.  As an aircraft known for airdropping critical supplies, weapons and troops in rugged, high-risk areas, the C-130 cargo airplanes can fly at lower altitudes and operate without needing a runway.

As a propeller-driven aircraft, the C-130 Hercules often operates in austere, rugged environments without a runway and is less susceptible to debris flying into the engine as would be the case in an aircraft such as a C-17 Globemaster III. As a propeller-driven aircraft, the C-130 airplanes are able to fly at low altitudes, land in more rugged conditions and withstand harsh weather such as obscurants.

So although Skunk Works is known for far-reaching basic research and long-term innovations looking years into the future, the organization operates with an equally intense commensurate focus to better enable existing systems by integrating new technologies as they emerge. This may partly explain why the Air Force has been taking massive new steps to arm C-130 airplanes with air-dropped weapons or even air-to-air and air-to-ground missiles.