How the Marines Could Use Robots To Become Even More Lethal 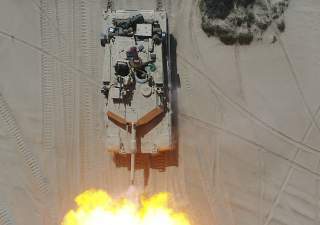 The U.S. Navy is moving quickly to develop robotic warships that could hunt submarines and other ships, screen aircraft carriers and convoys from air attack and sweep away enemy mines.

But there’s another mission the Navy should consider assigning to unmanned surface vessels, Neil Zerbe, a retired Navy officer, argued for the Center for International Maritime Security: shuttling supplies from ship to shore in the aftermath of an amphibious assault by U.S. Marines.

The Navy and Marines already have begun to experiment with unmanned surface vehicles, or USVs, for logistics mission, Zerbe pointed out. During the Valiant Shield war game in 2018, the Navy deployed a 12-foot Mantas USV “to provide rapid ship-to-shore logistics resupply.”

While this small, remotely-operated USV carried only 120 pounds of cargo, the proof-of-concept worked and successfully demonstrated that unmanned surface vehicles could safely and effectively resupply Marines ashore.

Using unmanned vehicles, either controlled by operators or programmed to follow a prescribed course, could be a game-changer for amphibious assault forces. Beyond taking operators out of harm’s way, using USVs for this mission frees manned craft for other missions.

Additionally, having a continuous, preprogrammed, logistics resupply process to perform one of the dull, dirty, and dangerous functions important in an amphibious assault enables the commander to focus on other warfighting tasks in the heat of battle.

While the proof-of-concept with a 12-foot Mantas USV was successful and received positive reviews from Commander Marine Forces Pacific logistics staff personnel, resupply in 120-pound increments is not the total solution to the enormous logistics requirements of even a squad of Marines ashore.

Much more is needed. For this reason, the maker of the Mantas family of USVs was asked by the Navy and Marine Corps to scale-up the 12-foot USV and develop a larger proof-of-concept unmanned surface vehicle for this mission.

Plans for larger Mantas unmanned surface vehicles, ranging from 38-foot to 50-foot long, are on the drawing board for further review by Navy and Marine Corps officials. While this may not be the ultimate size for the USV the expeditionary assault force needs as a long-term solution, it will go a long way to advancing the state-of-the-art in providing for the substantial logistics needs of Marines on the beach.

Zerbe’s call for robotic resupply could help further to expand the missions that the world’s leading navies are beginning to assign to unmanned vessels.

The U.S. Navy between 2020 and 2024 wants to spend around $4 billion buying 10 large unmanned surface vessels and nine unmanned submarines. A few, similar robotic vessels already are under contract.

The corvette-size robotic surface ship "will serve as both a sensor and a shooter" U.S. Navy Rear Adm. Randy Crites told reporters. The drone ships will be "smaller [and] more attritable than conventional ships, in addition to being more affordable."

The 51-feet-long Orca unmanned submarine the U.S. fleet is acquiring could perform mine countermeasures, anti-submarine warfare, anti-surface warfare, electronic warfare and strike missions, according to a Navy outline of the system’s capability development that USNI News obtained.

A Chinese company in early 2019 released a concept video depicting a 49-feet-long multi-mission robotic warship it’s developing. "In the video, [the USV] is shown alternately shooting down an aerial drone, sinking a submarine, machine-gunning a [boat] full of adversaries trying to steal it (after firing warning shots) and sinking a surface ship that looked a little like a Littoral Combat Ship," Defense News reported.

On a smaller scale, the British Royal Navy in April 2019 deployed small USVs to screen a mock beach assault by Royal Marines. “While advancing towards the beach, the marines were being supported by an unmanned boat cruising the coastline looking for enemy forces both on land and at sea, using its on-board cameras and sensors,” the navy stated.