How the Pershing II Missile Relit the Cold War 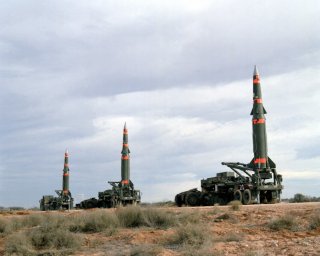 From the perspective of both Washington and Moscow, 1979 was a destabilizing year in world history. At the beginning of the year, the Shah of Iran fell, replaced by the theocratic rule of Ayatollah Ruhollah Khomeini. In November, armed religious zealots attempted an insurrection in Saudi Arabia, leading to vast societal changes throughout the broader Middle East. And in December, under the guise of a peacekeeping mission, the Soviet Union invaded Afghanistan, triggering worldwide outrage and kicking the Cold War into high gear.

In the same month, NATO forces decided that a new set of upgraded missiles should be stationed in Western Europe. Of the roughly 570 missiles to be placed, more than one hundred were “Pershing II” medium-range missiles, an upgrade of the existing Pershing 1a class; all of them were placed in West Germany, aimed east. The SALT II arms reduction treaty, signed between U.S. president Jimmy Carter and Soviet premier Leonid Brezhnev earlier in the year, restricted America’s ability to build new missile launch sites; therefore, the missiles were simply retrofitted into Pershing 1a launch sites, a loophole that enraged Moscow.

The West knew that the Soviet Union would see the placement of the new missiles as a provocation and would protest. In a sense, this was the goal. Two years earlier, NATO had been angered by the placement of Moscow’s SS-20 “Saber” missiles along the Iron Curtain. By putting the Pershing II missiles into place opposite them, it was hoped that the Soviet leadership would understand the threat of mutually assured destruction, back down, and agree to enter into arms-reductions negotiations. This notion formed the basis for NATO’s “double-track decision,” which offered the Soviets a chance to negotiate but pushed forward with missile deployment if they would not.

Moscow would not—and as a result of the missiles, the Cold War heated up along the Iron Curtain, raising renewed fears of military confrontation. The crisis reached a high point during NATO’s “Able Archer” exercises in November 1983, which Soviet leadership viewed as a cover for preparations to invade the Eastern Bloc; Moscow placed its own nuclear forces on full alert, ready to strike the West at a moment’s notice.

Fortunately, the exercises ended without an invasion, and after several rounds of succession in the Soviet Politburo, missile negotiations began once more—leading to the Intermediate-Range Nuclear Forces (INF) Treaty in 1987, helping to lower the temperature in the final months of the Cold War.