How Russia, China or America Could Accidentally Start a Nuclear War 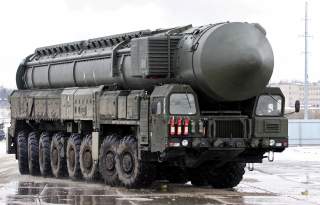 What happens when you use the same satellites to control nuclear forces as well as conventional troops?

That's the warning by a Washington think tank, which argues that the U.S. is inviting nuclear war by using the same command and communications systems to oversee both nuclear and conventional forces. But such "dual use" systems risk an inadvertent nuclear war, because an attack on non-nuclear assets, such as satellites or radars, could be perceived as an attempt to cripple America's nuclear deterrent.

The Trump administration's draft nuclear policy already states that cyberattacks against America, or attacks on U.S. satellites, could constitute a strategic threat that merits a nuclear response. But this raises a problem called "nuclear entanglement," where the traditionally bright lines between nuclear and non-nuclear systems become blurred.

In a study earlier this year, the Carnegie Foundation for International Peace pointed out that Russia and China were guilty of entanglement. For example, Russia keeps nuclear submarines and bombers at the same bases as conventional ships and planes: thus a strike by conventional U.S. forces against conventional Russian forces -- the sort of operation common in World War II -- could be mistaken by Russia as an American strike on its nuclear forces, triggering Russian nuclear retaliation. China plans to attack American satellites to disable U.S. command systems and smart weapons that rely on satellite guidance, because China believes this to be a part of conventional warfare -- despite the Trump administration declaring otherwise.

But a new Carnegie study says the U.S. is making the same mistake. "Starting in the last decade of the Cold War, the United States has increased reliance on dual-use systems by assigning nonnuclear roles to C3I assets that used to be employed solely for nuclear operations," writes James Acton, co-director of Carnegie's Nuclear Policy Program. "Until the mid-1980s, for example, U.S. early-warning satellites were used exclusively for detecting the launch of nuclear-armed missiles. Today, they enable a variety of nonnuclear missions by, for example, providing cuing information for missile defenses involved in intercepting conventional ballistic missiles."

The U.S. has also scrapped its Cold War land-based communications systems for controlling nuclear forces. Which means that satellites have become virtually the only means for nuclear command and control, and those precious satellites are also handling non-nuclear communications.

Even as cyberwarfare and anti-satellite weapons have emerged as major threats, U.S. satellite systems have become less redundant. In the 1980s and 1990s, the U.S. had two satellite-based communication systems for nuclear weapons. "Today, the United States is in the process of deploying just four Advanced Extremely High Frequency (AEHF) satellites that will be the nation's sole space-based system for transmitting nuclear employment orders once legacy Milstar satellites have been retired," writes Acton. Similarly, one of two radio networks for communicating with nuclear missile submarines has been shut down.

Acton explores several scenarios where the U.S. could overreact. "Russia might attack ground-based or space-based U.S. early-warning assets to defeat European missile defenses that were proving effective in intercepting its nonnuclear missiles," he writes. "Washington might see such attacks, however, as preparations to ensure that limited nuclear strikes by Russia could penetrate the United States' homeland missile defenses."

The U.S. fears that Russia could launch limited nuclear strikes to paint America into a corner, where it must either back down or risk escalating into full nuclear war. But Russia could attack dual-use communications systems with the goal of disrupting the operations of U.S. conventional forces, which the U.S. might perceive as an attempt to  cripple U.S. nuclear communications.

These issues apply to a lesser extent to China, which knows (and the U.S. knows that China knows) that a Chinese first strike wouldn't be powerful enough to prevent massive American retaliation. Still, a Chinese attack on, say, the Ballistic Missile Early Warning Radar system could be taken as the prelude to a Chinese nuclear strike.

Acton does point out that the U.S. reaction will depend to some extent on context, such as whether Russia has placed its nuclear forces on alert. But this is a slender reed on which to avoid nuclear destruction.

Acton does suggest a few mild measures to mitigate the problem, such as more resilient command and control systems, or small space-based sensors useful for detecting ICBM launches, but not for conventional warfare.