This Is How Russia Could Wage a 'Hypersonic' War 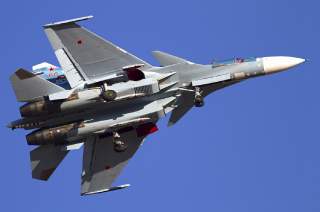 Looking to the future, the Su-57 (PAK FA) has the aerodynamic characteristics that would enable it to carry the Kinzhal: a high Mach max speed and flight ceiling. However, from the design, it looks like it lacks an internal bay large enough to carry the missile. Carrying the Kinzhal would likely compromise the stealth characteristics of the Su-57.

When Russia first demonstrated the Kinzhal hypersonic missile, it was mounted on a variant of the MiG-31 interceptor, the MiG-31K. The high speed and altitude of the MiG are utilized to give the Kinzhal a significant energy boost to allow it to attain its extreme speed and range.

But on July 2, 2018, Russia media outlet TASS reported that the Kinzhal was also tested on the Tu-22M3 bomber. This is notable news as while these bombers can fly high and fast, they are not as high performance as the MiG-31K. It’s rumored that the Tu-22M3 could carry as many as four Kinzhals on a single sortie.

This could mean that the Kinzhal could be integrated onto many other airframes used by Russia, which could have worrying implications for NATO air defenses and air forces. If a Kinzhal could be launched from practically any strike fighter, including those that could take off and land on short runways, many more targets could be within its reach.

One of the strike fighters that almost definitely could field the Kinzhal is Russian Naval Aviation’s Su-33. The Su-33 is the primary aircraft used on the Admiral Kuznetsov, the Russian Navy’s only aircraft carrier. As such, the Su-33 is rated to carry a variety of anti-ship missiles.

This includes the Kh-41, a navalized version of the P-270 Moskit, a ramjet powered supersonic anti-ship missile. With a launch weight of around 4500 kilograms and a length of almost ten meters, the Kh-41 is actually longer and heavier than the reported weights of the Kinzhal. With some modernization, the Su-33’s airframe would probably be Kinzhal capable with minor adaptation.

The flight profile of the Su-33 also compares favorably to the Tu-22M3, with a higher service ceiling and top speed. While the Su-33 has a shorter range, the long range of the Kinzhal compared to the P-270 Moskit or any other ALCM the Su-33 could potentially carry.

The Su-34 is another plane that would likely be used to carry the Kinzhal. Like the Su-33, it’s rated to carry the Kh-41. Assuming the electronics on the Kinzhal are similar to other Russian air-launched cruise missiles (ALCM), the Su-34 likely has the most of the avionics required to launch it, as the Su-34 can launch versions of the Kh-55 and Kh-SD subsonic ALCM.

Other variants of the Su-27 including the Su-30SM (which also features the canards seen on the Su-33 that allows it to have increased lift, marginally improving performance under load) could potentially carry the Kinzhal, although it’s unsure whether their centerpoint stations are rated for the heavy Kinzhal missile.

The Tu-160 could probably also carry the Kinzhal, however, it probably would require a significant refit of the internal weapon carriage. As the Tu-160 carries a rotating launcher for Kh-55 and Kh-10(X) type missiles, a full “six pack” of these missiles weighs far more than a single Kinzhal.

The problem with this configuration would be the low speed of the Tu-95MSM. Little is known about how the Kinzhal attains its extreme speeds, but every airplane listed before has been capable of going supersonic. As such, the Kinzhal probably would not work or would lose its hypersonic characteristic or a significant portion of its range if fired from such a platform.

Other planes that see significant use with the RuAF that probably cannot fire the Kinzhal are the Su-25 attacker, Su-24 bomber/reconnaissance aircraft, MiG-29, and Yak-130. From these, all lack hardpoints capable of carrying the weight of the Kinzhal. The MiG-29 while it resembles the Su-27, lacks the centerline station between the engines as the engines are put closer together and the airframe is far lighter. The Yak-130 and Su-25 are subsonic and face similar problems to the Tu-95 when it comes to the carriage of the Kinzhal.

Looking to the future, the Su-57 (PAK FA) has the aerodynamic characteristics that would enable it to carry the Kinzhal: a high Mach max speed and flight ceiling. However, from the design, it looks like it lacks an internal bay large enough to carry the missile. Carrying the Kinzhal would likely compromise the stealth characteristics of the Su-57.