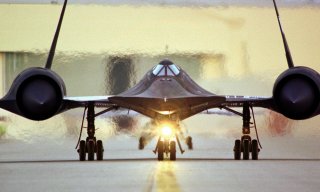 During the Vietnam War, when the famous SR-71 Blackbirds conducted reconnaissance missions, they always had cover from fighter jets, even though no SR-71 was ever shot down in its entire life.

But one night during the war, fighter pilots had to deal with a threat that had nothing to do with enemy planes--it was a meteor.

The story was told in a 2016 book called War For the Hell of It: A Fighter Pilot's View of Vietnam, a memoir by Vietnam-era fighter pilot Ed Cobleigh, which was excerpted in 2019 by the Aviation Geek Club.

Cobleigh tells of being told, one night during the war, that he would be providing cover for an SR-71 that would be “crossing North Vietnam to gather intelligence data.” He disagreed with the idea, since he knew the SR-71 being threatened by North Vietnam’s MiG-21 was practically impossible, especially since the North Vietnamese rarely flew their planes at night.

But while up in the air, Cobleigh noticed a meteor in the sky.

“Suddenly a bright purple fireball streaks across the sky above the Phantom’s canopy. It is moving from the southeast to the northwest and it is really hauling ass,” he wrote. "The brilliant incandescent light illuminates the cockpit as bright as day, destroying what little night vision I have built up. I crane my neck and swivel my head and helmet trying to get a better view of the flame-trailing object. I yell into my inter-cockpit microphone to the Navigator.”

Upon seeing it, Cobleigh shoved both throttles forward. He wondered whether the Blackbird had blown up, or if a missile had been fired, either from the ground or from the air. But he soon dismissed all of those possibilities and realized it was something that had nothing to do with the enemy at all.

“It is a meteor, larger and brighter than any I have ever seen,” he wrote. “A rock, probably the size of a grapefruit, is entering the earth’s atmosphere from outer space. Its kinetic energy is being converted to super-hot gases by air friction as the rock burns itself out, maybe fifty miles up. Everyone who flies at night, all the Sewer Doers, see meteors. Nearly always, they appear as they do on the surface of earth, only brighter. This one is a luminescent monster with a visible size and odd color, but it is totally harmless.”

Cobleigh realized that in reaction to the meteor, he needed to do nothing at all.

“Somehow, tonight’s mission all makes perfect sense now,” he wrote. “We spent a gorgeous evening flying over on exotic land. We accomplished a night aerial refueling to burn jet fuel for no apparent reason. We kept an invulnerable aircraft from harm’s way. We didn’t shoot down the MiGs that weren’t there. Finally, left a meteor alone. It makes a fellow proud to be a soldier."