How to Truly Secure Peace in Afghanistan 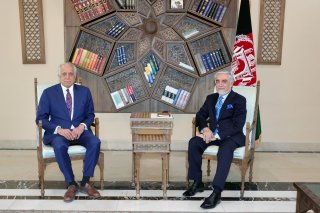 The newly proposed U.S. peace plan for Afghanistan will accelerate and revive the lifeless Afghan peace process demonstrating the Biden administration’s eagerness to end the Afghan war in a more sensible manner. Although more work will be needed to develop a thorough and feasible future roadmap, the plan sets the stage for the opposing parties to ruminate and agree on a way forward. Careful management of and follow-through of the process until the end are vital for the plan to result in enduring stability in the country.

U.S. Special Envoy for Afghanistan Zalmay Khalilzad presented a new peace initiative to President Ashraf Ghani and other political leaders of the country. The envoy also carried a letter from Secretary of State Antony Blinken to the Afghan president expressing American impatience with the war and urging him to support the plan. The new proposal sets aside the current sluggish peace negotiations between the Afghan government and Taliban teams in Doha and provides a quicker path to a settlement with the help of UN mediation. The plan proposes a new transitional participatory government and a draft work plan for resolving differences over the constitution and other governance-related differences. The United States has also proposed an UN-convened international conference to be held in Turkey and attended by all Afghan groups and international stakeholders who will, hopefully, endorse the plan and agree on the next steps.

The plan offers renewed hope for a settlement for two reasons. First, the Afghan conflict is a multinational problem with strong regional links. The solution requires a multidimensional approach involving both Afghan and non-Afghan stakeholders and actors. The comprehensive and all-inclusive nature of the proposed plan sets a strong platform for all actors to coalesce. Second, the plan proposes preserving key state institutions such as the Afghan National Defense and Security Forces and others built in the past twenty years with heavy international support and funding. This will ensure the continuation of state affairs protecting the country from converging into chaos during the transition to a permanent and mutually agreed form of government.

Afghans are cautiously optimistic and hope the new initiative will put an end to their sufferings. Afghans’ fears are based on past experiences with similar plans initiated but not completed resulting in further bloodshed. Learning from past experience with failed peace plans, the proposed process and the subsequent roadmap must be carefully managed and monitored until it is fully implemented. A comprehensive long-term strategy designed around the proposal that addresses the diplomatic, political, and economic aspects of the conflict will ensure success.

Diplomatic and political parts of the strategy must manage the Afghan conflicts’ regional links. Due to the conflict’s deep regional roots, a sincere commitment of regional countries and persistent international support are the backbones of the peace settlement and its endurance in Afghanistan. Focused diplomatic effort and appropriate political pressure will secure the critical support and backing of the regional countries preventing misconduct. The diplomatic and political pressure must continue for several years after the peace settlement. Evidenced by past experience, a lack of honest regional commitment to the process can lead to the plan’s failure.

Furthermore, international forces and the United Nations must remain engaged in Afghanistan until the full implementation of a settlement agreement and subsequent formation of a permanent and functional government. They must monitor the actions of all actors, including regional countries, to ensure actors abide by the settlement terms and conditions.

The strategy must also include an economic aid package to the country put to work immediately after an agreement is reached. In addition to sustained support for the Afghan security forces, an aid package as part of an overall economic development strategy will help absorb Taliban fighters into the mainstream Afghan society and provide them with economic opportunities. Development projects must target areas and people of the country who are badly affected by the war and left deprived of the past twenty years of international aid projects due to insecurity. Such opportunities will prevent poverty-stricken Afghans from joining groups such as the Islamic State and others.

The plan may have its shortcomings, considering Afghan experiences of similar initiatives in the past, but it seems to be the only option at this time. The alternative to this plan is the continuation of bloodshed in Afghanistan and possibly beyond Afghan borders. It is the right step in revitalizing the Afghan peace effort and ending the war responsibly. However, the process can fail if it is not managed carefully with the help of an effective strategy. The Afghan government, political groups, and the Taliban must set their group and personal interests aside and work for the common good of all Afghans. They must welcome and play a positive role in the successful implementation of the plan to prevent further bloodshed of Afghans.

Gul Maqsood Sabit teaches business at Ohlone College of Fremont, California, USA. He is former Deputy Minister of Finance in the government of Afghanistan and former President and CEO of Pashtany Bank, a state-owned bank in Afghanistan. He can be reached at [email protected].

Why the Afghanistan Peace Process Requires an American Exodus