How the U.S. Air Force Is Arming Its B-52s With Hypersonic Missiles 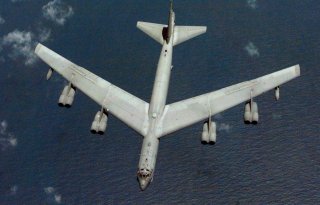 The flight demonstrated the transmission of telemetry and GPS data from the weapon, called the AGM-183A IMV-2 (Instrumented Measurement Vehicle), to ground control stations, solidifying an essential part of the weapons overall launch, guidance and flight trajectory systems.

“The test verified system integration with the B-52 launch platform and telemetry which practicing concept of operations that will be utilized during its first Booster Test Flight later this year,” a report from the Air Force Test Center, Edwards AFB, Calif., stated.

The ARRW is a “boost glide” weapon which achieves speed and range by “skipping off the upper atmosphere,” developers explain. “They can be a winged glider or take on a canonical shape, making them maneuverable and high-speed with a high “lift over drag ratio,” a senior industry weapons developer said.

Boost-glide hypersonic weapons, the industry official explained, “propel a glide vehicle to a point in space where it has a certain altitude and a certain forward speed.” The speed of descent then propels the weapon toward its target.

Should a commander need to destroy an enemy ship, vehicle or aircraft quickly, meaning before it approaches close enough to be a threat, the emerging weapon could offer new warfare options. The weapon is slated to become operational over the next several years.

Arming a B-52 with hypersonic weapons brings new combat dynamics to air war for a variety of reasons. For instance, it can more than compensate for the B-52s “non-stealthy” configuration by offering the opportunity for the plane to destroy enemy air defenses and other high-value targets without itself being vulnerable to enemy fire in highly contested areas.

Another key, albeit self-evident, advantage with hypersonics is time. The fundamental premise is to give offensive platforms the opportunity to destroy targets before enemies have the “time” to respond, providing a distinct tactical advantage.

Achieving air-launched hypersonic speed is by no means easy, as it relies upon scramjet technology and newer methods of propulsion and heat management. The biggest challenge when it comes to engineering hypersonic weapons is widely known to be related to managing temperature. Finding ways to manage the excess heat generated by a weapon traveling at that speed presents technical challenges, as the weapon can itself become too hot, burn up or simply be thrown off course.

Materials can melt and the weapon’s trajectory can easily derail. Air Force Research Lab scientists often refer to it as “boundary layer phenomenology,” a term referring to the airflow surrounding a hypersonic projectile. Engineers seek to create contours able to generate a smooth or “laminar” airflow, as opposed to a turbulent airflow which can throw a weapon off course. A rough or uneven airflow can generate even more heat, leading to the transfer of materials in the air surrounding the weapon, which disrupts flight trajectory.

However, the Air Force and other Pentagon weapons developers are making great progress when it comes to thermal management, and this recent test demonstrates that the electronics, guidance systems and intended flight path of the weapon appear to be on track.