How the U.S. Military Wants to Consolidate and Protect Its Cyber Assets 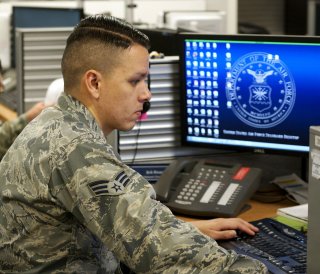 It is a war without borders, containing no specified geographical parameters and not focused on “finding an individual” per se, but rather its a new kind of combat-oriented toward defending and destroying information networks, protecting data and “hardening” weapons systems to prevent penetration.

It is cyberwar, a fast-growing frontier increasingly commanding new levels of urgency as the Pentagon seeks to pivot its combat strategy into an information age characterized by AI, machine learning, cyberattacks, encryption, hacking, phishing and adversarial network intrusions. It is a faceless, yet extremely lethal adversary often relying upon unknown points of origin.

These challenges, according to Lieutenant General Timothy Haugh, Commander, 16th Air Force, inform, fortify and relate to a focus on “targeting enterprises,” such existing sensor-to-shooter decision cycles. This is because such decision cycles are ultimately data-driven to a large extent.

A key need to adapt, he explained, is to move beyond the counterinsurgency era, wherein much of the principle combat activity centered around finding and killing individuals in a specific geographical location.

“Our war is not constrained by geography. The information available to us will not be grounded in where an adversary is. Adversary observation points are not from fixed locations,” Haugh told The Mitchell Institute for Aerospace Studies in a special Aerospace Nation interview series. The focus, he stressed, must be global.

Given these conceptual, technical and even tactical nuances, data convergence emerges as a defining emphasis, Haugh explained.

There are a number of ways to accomplish this, as much of it centers upon data consolidation and decided efforts to decrease the “hardware footprint.” This can mean using fewer, yet better-networked servers to access otherwise quite separate information systems. The more global the focus, the less regional IT centers might be needed. Instead, information can be consolidated and actual hardware can be minimized.

Cloud migration is one way this can be accomplished, as it enables combatants to easily acquire available intelligence data, charts, information papers or sensor information from otherwise disconnected computers or networks.

The Air Force is among the services now involved in a massive cloud migration, in part for these purposes.

The cloud does, in some respects, introduce new vulnerabilities as multiple points of entry might allow an intruder to access or disrupt vast amounts of information, it also draws upon increased virtualization to a greater degree, which can make security upgrades and software modernization more efficient and widespread.

The more ubiquitous and accessible information becomes, the more networks need to be “hardened.”

This is one reason why the Air Force is now moving quickly on a recently established entity known as the Cyber Resiliency Office for Weapons Systems (CROWS). Recognizing that weapons systems are themselves much more cyber reliant, the office analyzes specific platforms, technologies and weapons with a mind to finding and fixing vulnerabilities.

Improved data access and networking bring unprecedented warfare advantages, all the while necessitating a great need to build “defenses” into otherwise vulnerable systems.

An approach of this kind is fundamental to Haugh’s point, namely that weapons functionality and sensor to shooter networks fundamentally rely on data infrastructure to a large degree. The data itself is often dispersed and not contingent upon any specified location.

The CROWS office is also built upon a much-emphasized Air Force premise that it is crucial to “bake in” cyber protections earlier in the weapons development or prototyping phase, in part to anticipate and deflect cyber attacks.