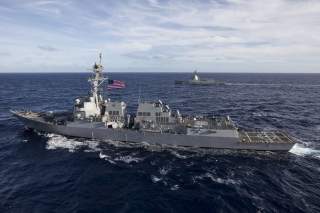 “Fleet level processes and procedures designed for safe and effective operations were increasingly relaxed due to time and fiscal constraints, and the ‘normalization-of-deviation’ began to take root in the culture of the fleet. Leaders and organizations began to lose sight of what ‘right’ looked like, and to accept these altered conditions and reduced readiness standards as the new normal.” –2017Strategic Readiness Review commissioned in the aftermath of the collisions involving USS Fitzgerald (DDG-62) and USS John S. McCain (DDG-56)

The U.S. Navy is suffering from self-inflicted strategic dysfunction across the breadth of its enterprise. This series seeks to explore the theme of the normalization of deviation in some of the most critical operations, activities, and attributes that prepare the U.S. Navy for war. Because the U.S. Navy is the senior partner in its alliance activities many of these problems probably hold true for allied navies as well.

Part One below looks at U.S. Navy combat training and draws a comparison with Chinese Navy training.

Part Two will examine firepower relating to offense, defense, and across force structure.

Part Three will look at tactics and doctrine with an emphasis on network- and carrier-centric fleet combat.

Part Five will look at the relationship between the Navy’s availability and material condition.

Part Six will examine the application of strategy to operations.

Part Seven will look at strategy and force development, including force structure assessment.

Part Eight will conclude with recommendations for a force development strategy to refocus the U.S. Navy on the high-end fight and sea control.

“This ship is built to fight; you’d better know how.” –Former Chief of Naval Operations Admiral Arleigh Burke (ret.) at the commissioning ceremony of the destroyer USS Arleigh Burke (DDG-51)

The training strategy of a military service is one of its most fundamental responsibilities. Training is central to piercing the fog of war as much as possible before combat exacts its price. Training is what forges people into warfighters.

Soon after the Cold War ended the Navy announced a “change in focus and, therefore, in priorities for the Naval Service away from operations on the sea toward power projection.” A new operating focus on low-end missions such as partner development missions, striking land targets, and deterring rogue regimes came to dominate its focus. Different training followed. This training and operating paradigm replaced the high-end threat focus the Navy was originally made for in an era of great power competition against the Soviet Union. But the shift was wholesale, and did not attempt to preserve a responsible minimum of important skills that still held relevance. Perhaps worst of all, somehow this shift allowed U.S. Navy training to fall to incredible lows and remain there for most of a generation.

So much valuable corporate memory has evaporated. Extremely unrealistic training exercises starved Sailors of opportunities to learn important skills and prove themselves. And while the U.S. Navy slipped for years its latest rival, the Chinese Navy, made strong gains in the very same skills the U.S. Navy was losing.

Realism and the Nature of U.S. Navy Exercising

“The mission of the fleet in time of peace is preparation for war, and in this preparation tactical training heads the list of requirements…No matter how perfect we are in every other respect, if we cannot make good here we might as well not exist.” –Captain William S. Sims, “Naval War College Methods and Principles Applied Afloat,” 1915.

For years the Navy’s training exercises took on a scripted character where the outcomes were generally known beforehand and where opposing forces were usually made to lose. Scripted training is not inherently wrong if it is used as a stepping stone to more open-ended and complex exercises. However, such events were very few and far between. As a result most U.S. Navy high-end combat training remained stuck at an extremely basic level that barely scratched the surface of war. As a report from the Naval Studies Board described Navy training, “There is little free play, and exercises are typically scripted with little deviation allowed.”

One of the most important methods of making exercises realistic is facing off against opponents that can win. Going up against a thinking and capable adversary creates a level of challenge that simple target practice cannot approach. Red teams and opposing forces can be highly specialized units that incorporate key intelligence insights to make their behavior more like that of a foreign competitor. Opposing forces can also be more simple when using scratch teams where training units can be divided into opposing sides and told to challenge each other. Scratch opposition forces are not as realistic as using teams informed by intelligence on competitors, but scratch teams can pose a real challenge because it is still troops competing against troops.

It appears Navy exercising was devoid of opposition forces that stood a chance. In “An Open Letter to the U.S. Navy from Red,” Captain Dale Rielage, the intelligence director of U.S. Pacific Fleet, writes from the perspective of an opposing force commander to the U.S. Navy and offers insight into how the Navy minimized challenge in its training by handicapping its Red teams:

“Your opposing forces often are very good, but you have trained them to know their place…our experience is that they have learned to self-regulate their aggressiveness, knowing what senior Blue and White cell members will accept. As one opposing force member recently told us during a ‘high-end’ training event, their implied tasking included not annoying the senior flag officer participating in the event. They knew from experience that aggressive Red action and candid debriefs were historically a source of annoyance. They played accordingly.”

Rielage invoked the infamous Millennium Challenge exercise. This exercise was a massive warfighting experiment that became a controversy after the opposing force commander Lt. Gen Paul van Riper quit in protest. Riper at first inflicted devastating losses on the Blue team through unconventional means, but subsequent rounds cemented parameters that forced Red to lose. According to Rielage, “The entire event generally is remembered as an example of what not to do…The reality is that we repeat this experience on a smaller scale multiple times each year.”

Rielage then goes on to suggest the problem is extremely pervasive and longstanding:

“You talk about accepting failure as a way to learn, but refuse to fail. It is instructive to ask a room of senior officers the last time they played in—or even heard of—a game or exercise where Red won.”

If the Red teams of Navy exercising are so constrained they rarely ever win then what are they being used for? Admiral Scott Swift, recent commander of U.S. Pacific Fleet, gives a clue in “A Fleet Must be Able to Fight.” Swift points out that “Our warfighting culture focuses on kill ratio—the number of enemy losses we can inflict for every loss we take.” However, Navy exercising usually results in extremely favorable tradeoffs. Swift argued that the Navy’s “reliance on high kill ratios” causes it to focus on “exquisite engagements,” or “firing from a position of minimum uncertainty and maximum probability of success (emphasis added).” Swift concludes that in high-end operations “it is not possible to generate the number of exquisite engagements necessary to achieve victory.”

Warfighting culture is a product of training. If the Navy’s warfighting culture was focused on easy (“exquisite”) engagements that always earn high kill ratios then perhaps the reason opposing forces almost never won is because they were relegated to the role of cannon fodder.

One example of Red teams being used for simplistic target practice is seen in how submarines were often pitted against warships. Only three years ago did the surface fleet finally open a fully integrated tactical center of excellence for itself, the Surface and Mine Warfighting Development Center (SMWDC, or the TOPGUN of the surface fleet as they often say), whose responsibilities include improving training and tactics. One SMWDC commander spoke of how the Navy was using the surface fleet as an opposing force to train submarines in certain exercises, where according to Admiral John Wade, “Up until two years ago, surface ships were kind of just targets…They told you to go drive from Point A and Point B…The submarines were just crushing us.”

How else can one reduce an opponent to easy prey? The Navy accomplished this in part through a linear style of training. Navy training took the form of a series of events that focused on individual warfare areas. These include mission areas such as anti-air warfare, anti-surface warfare, and anti-submarine warfare. Exercise and certification events mainly focused on working only just one skillset at a time. Admiral Swift suggested Navy training amounted to “ticking off a discrete schedule of individual training objectives” and argued that this is why the Navy could not execute critical warfighting tasks with confidence. While the Navy did manage to train individual skills, “…we as a force never practiced them together, in combination with multiple tasks…”