How the U.S. Navy's Drone Ships Are Getting Better 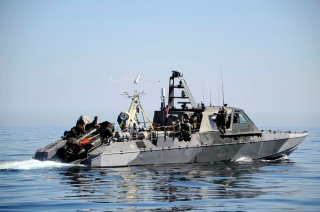 Developed by the Office of Naval Research and Naval Sea Systems Command, “Ghost Fleet” represents a Navy strategy to surveil, counter, overwhelm and attack enemies in a coordinated fashion—all while keeping sailors on host ships at safer distances.

Algorithms and AI-enabled navigational technology are fast-becoming extremely sophisticated and able to better avoid collisions at sea. Furthermore, perhaps of equal significance, unmanned systems bring massive amounts of endurance as they can increase “dwell time” and remain on mission for days at a time without needing to have humans disembark.

Small and large boats, many of them called Unmanned Surface Vessels, are designed to conduct ISR missions, find and destroy mines and launch a range of attacks, including using electronic warfare and even mounted guns. The concept is to use advanced computer algorithms bringing new levels of autonomy to surface warfare, enabling ships to coordinate information exchange, operate in tandem without colliding and, if needed, launch combined assaults.

As communications and networking technologies continue to evolve rapidly, drones will increasingly be able to function in a cross-domain capacity, meaning across air, sea, land and undersea operations. A human at a control station, using a low bandwidth connection, can perform command and control functions without needing to actually drive the vessels.

The Navy and ONR are already immersed in the development of a variety of USVs, including a sonar-equipped, mine-detecting Unmanned Influence Sweep System, or UISS, for the Littoral Combat Ship and other vessels. The UISS is carried by a Textron-developed Common Unmanned Surface Vehicle, or CUSV.

Other applications include the possible use of surface swarms, larger supply vessels or command and control ships for instance, designed to detect an enemy surface target and relay information to unmanned surface vessels or undersea drones. All of this would be designed to operate in a combat circumstance while needing little or no human intervention. To advance this concept, the Navy is now working on networking surface, air and undersea drones together.

Algorithms governing autonomous maritime navigation have progressed to the point where USVs can more effectively “perceive” and respond to their surrounding environment while in transit, program managers with the Office of Naval Research have explained. Small, high-tech autonomy kits can be integrated onto the unmanned surface vessels.

While unmanned surface ships are not yet operating with weapons on board, industry and Navy developers are now exploring and testing ways to integrate guns, lasers, enemy fire interceptors or even small missiles with surface drones. Of course, these would be controlled by human operators. Current Pentagon doctrine specifies that, when it comes to the prospect of using lethal force, a human must always be “in the loop” making the decision—regardless of how quickly autonomy is progressing.​

Armed surface drones, it seems self-evident, could bring a substantial force protection element to surface warfare. Networked drone boats could spread across large swaths of open ocean to, potentially in coordination with aerial drones, and fire upon approaching enemy ships, boat swarms and even incoming missiles. The Navy does have layered suite of ship-launched interceptor missiles, including the SeaRAM, Rolling Airframe Missile, Evolved Sea Sparrow Missile Block II—and even the phalanx-firing Close-in Weapons System for the closest enemy attacks. It certainly seems conceivable, should there be a way to network sensors, radar and fire control, that some of these interceptor weapons might be able to arm forward stationed unmanned ships. Primarily, however, the nearest term applications might likely involve smaller, mobile attack weapons such as .50-cal machine guns, 57mm guns or other standard deck-fired weapons or even MANPAD types of heat-seeking anti-air and surface warfare attack weapons.

The drone boats are also increasingly vital when it comes to fast-emerging Navy countermine warfare tactics. Mine warfare has taken on much greater urgency in recent years, given the proliferation of inexpensive sea mine technology and the range of potential adversaries who could employ them, according to a National Research Council and Naval Studies Board published text from 2001—“Naval Mine Warfare, Operational and Technical Challenges for Naval Forces.”

Tracing the origins of Navy’s massively stepped-up mine warfare emphasis as far back as the Gulf War, “Naval Mine Warfare” cites a “growing realization that sea mines are readily available to potential U.S. opponents.” The essay specifically cites Russia as a major supplier of modern mine weapons and states that more than 50 countries possess sea mining capability.

“In the future, surface warships and submarines may be dispersed throughout the theater doing key task unit operations—strike, fire support, theater air defense—as opposed to operating primarily in close proximity to a battle group. Warships so employed will have to provide much of their own self-protection against various threats, including mines,” the Naval Mine Warfare paper writes.