How Will the House of Representatives’ Coronavirus Rescue Plan Impact College Students? 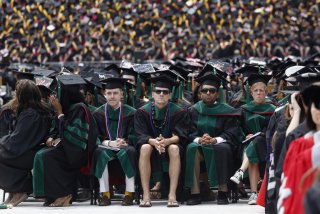 Today the House of Representatives will attempt to pass a $2 trillion stimulus package through a voice vote, to avoid members having to return to Washington, DC to form a quorum. For many of them, travel is considered too risky due to the prolific spread of the coronavirus. The bill passed the Senate late Wednesday evening in a vote of 96 to 0. While there are threats by some members of Congress to procedure their way into a recorded vote, it would only delay passage by up to a day. President Donald Trump is expected to sign the legislation by this weekend.

The stimulus will act as a great relief for former college students weighed down by debt.

On March 13, President Trump directed the Department of Education to begin waiving all accrued interest on federal student loans for the duration of the coronavirus pandemic. Later, Secretary of Education Betsy DeVos said that the department would be instituting a two-month “coronavirus forbearance” where borrowers did not have to make their monthly payments. This required former students to contact their loan servers and go through a request process.

But now, as part of the stimulus package, payments on federal student loans will be deferred for at least six months, until October. Any interest accrued during this period will later be waived. And in another important change, the deferment is automatic, requiring no action from the former student.

The bill goes as far as to benefit borrowers who are already in default on their loans, an increasingly high percentage of former students. Unlike all other forms of debt, student loans cannot be dropped through the bankruptcy process and remain attached to an individual until their death or until full payment. To receive this full payment, the Department of Education has made it a practice to seize borrowers’ tax refunds and social security checks if they are in default.

Upon passage, the stimulus package will end these practices for the duration of the coronavirus pandemic, and even begin to refund some of the money that was taken.

This alleviation of monthly payments, for some borrowers reaching up to a thousand dollars, is the primary form of relief they’ll see come from the stimulus. Many students and former students, who were either working part-time or did not file sufficient income taxes in 2019, will be ineligible for the government’s one-time payment of $1,200.

Former Vice President Joe Biden, the presumptive Democratic 2020 nominee, believes the current bill does not go far enough to address the concerns of students and wants follow-up measures. This includes the forgiveness of at least $10,000 of debt for each borrower.

Student loan forgiveness has become a cornerstone of progressive politics, with politicians such as Senators Bernie Sanders (D-Vt.) and Elizabeth Warren (D-Mass.) championing this issue popular among Millennials and Generation Z.