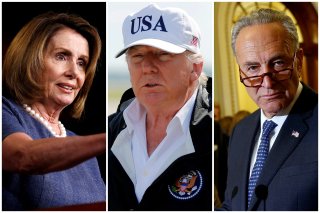 After days of haggling, Senate Republicans and Democrats announced early yesterday morning they had reached an agreement for a two trillion dollar stimulus package. By the conclusion of the day, last night, the bill passed 96 to zero.

The two senators most likely to vote against the Keynesian pet project, Mike Lee of Utah and Rand Paul of Kentucky, are currently under self-quarantine. Paul has tested positive for the coronavirus, and Lee along with his fellow Utahan (by way of Massachusetts) Mitt Romney are isolating themselves after interacting with him. John Thune, the Senate Majority Whip, missed the vote by minutes, saying he was returning home to South Dakota after not feeling well.

The most non-traditional inclusion in the bill is direct payments to Americans in the form of a one-time check. Individuals making less than $75,000 a year will receive $1,200 checks, and couples making less than $150,000 will receive $2,400. The money then scales downward until it is eliminated for individuals making over $99,000, and couples making over $198,000. An extra $500 will be given per child. These numbers were originated by Senate Majority Leader Mitch McConnell and did not undergo changes in the past week.

The government will be using income tax filings from 2019 or 2018 (depending on individual circumstances) to determine eligibility. This will eliminate many low-income people from receiving the benefit. In a decision that has engendered further controversy, college students will not be eligible to receive the money, nor will their parents be able to collect the $500 bonus. The bill does, however, place a hold on the payment of federally owned student loans for six months.

One-fourth of the stimulus’ price tag will create a $500 billion slush fund to bail out corporations. This includes $46 billion in direct assistance, with a majority of it going to U.S. airlines. The rest will take the form of low-interest loans. Accepting any of the relief will entail the companies to prohibit stock buybacks for one year. An additional provision was added banning federal assistance from benefitting any company associated with the president, vice president, or members of the cabinet.

Another $250 billion is going to expanded unemployment insurance, giving workers laid off from their jobs $600 a week for four weeks, which is in addition to the money they would already be receiving from state unemployment.

The House of Representatives will attempt to pass the stimulus package through a voice vote on tomorrow. This will forgo the need to compel members to return to Congress, where multiple legislators and staff members have tested positive for the virus. If they are successful, it will arrive on President Donald Trump’s desk to be signed by the end of what used to be the workweek.