How Would F-35s in Europe Fare Against the Russian Air Force? 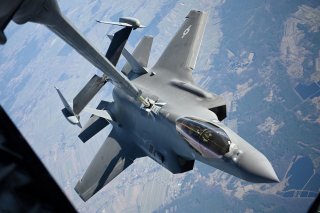 The U.S. Air Force has redeployed more air power to Russia’s border in the Baltic region to bolster NATO allies and preserve deterrence with Russia.

A statement from U.S. Air Force in Europe on Sunday, February 27 said that six F-35 Lightning II fighters returned to Spangdahlem Air Base in Germany after being forward-deployed to the Baltic states. They were replaced by Royal Air Force F-35s.

Could F-35s from NATO air forces stop a Russian invasion by establishing air superiority and destroying advancing ground forces from the air? The advanced fifth-generation fighters could be enough to tip the balance.

The U.S. Air Force alone operates roughly three hundred F-35As, according to Air Force Magazine. The U.S. Navy and Marine Corps also operate a number of F-35Bs and F-35Cs that can operate from aircraft carriers and amphibious assault ships. The USS America, an amphibious assault ship, has previously deployed with as many as thirteen F-35Bs on board.

Norway, Poland, the Netherlands, and the United Kingdom also have operational F-35s. Denmark and Poland will soon operate F-35s of their own. NATO already has enough operational F-35s to field a multinational force of fifth-generation stealth fighters sufficient to defeat Russian airpower.

Russia has claimed that its Su-57 fighter has fifth-generation capabilities, but it lacks sufficient numbers of the aircraft. Numerous reports in the Russian media say that Russia only has twelve Su-57s and plans to acquire over seventy in the coming years. The Russian air force would be facing an opponent with quantitative and qualitative advantages.

Sun Tzu’s famous “mass matters” concept still applies even as new technologies such as long-range sensing and precision-guided weapons have changed warfare. Multiple squadrons of F-35s, dispersed yet networked across an expansive sphere of operations, could establish air superiority against Russia. The ability of NATO to integrate a multinational force of F-35s using its could compound a fleet size advantage in the air as F-35s could share surveillance and targeting data across multiple squadrons dispersed across wide areas of terrain.