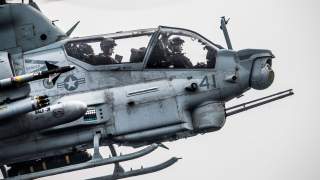 Key point: There is a way to use military and civilian vessels to stop Beijing's maritime insurgency.

The rule of an international system that upholds the legal and philosophical principle of the “freedom of the seas” ranks among America’s most important if uncelebrated national interests. The preservation of a free and open maritime order is imperative for a country whose ability to connect with over 80 percent of the world’s population depends on overseas transportation. For nearly four centuries, the oceans have held the status in legal principle (later codified in the United Nations Convention on the Law of the Sea) of a global commons, over which national sovereignty is limited and based strictly on adjacent landward holdings. Yet this vital architecture is under grave threat in the South China Sea. China is working aggressively to not just gain military dominance, but even more importantly, to impose an alternative regime of governance on this vital waterway based on Chinese domestic laws and Beijing’s continental view of maritime sovereignty. The present U.S. approach to the problem does not address this core dimension of China’s aggression, for the desultory show of the flag in U.S. Freedom of Navigation operations as presently construed lacks staying power and therefore decisive strategic effect. But China’s victory thus far is by no means final. For the United States and its allies to stage a recovery, it is necessary to reframe our understanding of the Chinese campaign in the South China Sea and reorient U.S. strategy to defeat it.

The Battle of Legal Regimes

The crux of the challenge in the South China Sea is not one of a conventional force-on-force confrontation. Short of a full-scale war that both the United States and China presently seek to avoid, it is instead a political contest of wills that manifests itself in a duel between two competing legal systems of authority, namely the near-universally recognized regime of prevailing international law at sea versus China’s revisionist, terrestrial view of maritime sovereignty, in which ocean areas can be claimed like land as “blue national soil” to keep the ships and mariners of other countries out. In this “battle of legal regimes,” the response of local Southeast Asian civilian mariners—as opposed to the actions of either of the belligerent forces—will decide the outcome. Therefore, the decisive question here is not “which side would prevail in battle” but rather “whose laws do the civilians follow?”

The battle of legal regimes is a form of implicit vote-getting contest, in which the proponents of each regime seek adherents among the civilian population. This process is not so much an attempt to win over “hearts and minds” as it is a struggle for control, which is gained by converting civilians via inducement or coercion to the practice of following one set of laws and not those of the opposing party. Given their own free choice without any forcible measures on either side, local civilian mariners in Southeast Asia would almost undoubtedly opt to follow the regime of current international law that enshrines and implements the freedom of the sea for all nations. The benefits of the open and rules-based prevailing order come into even starker relief when compared to the opposing alternative—a regime espousing a Sinocentric, unfree and closed sea in which non-Chinese vessels sail only at Beijing’s pleasure. Since its proposed regime for the South China Sea is qualitatively so profoundly unappealing, China seeks to win “votes” through the coercive use of the negative instruments of its national power. Accordingly, China employs intimidation and threats of force from the China Coast Guard and Maritime Militia, backed by the high-end combat capabilities of the People’s Liberation Army Navy, to make it unsafe for civilian mariners to ply waters that they rightfully have access to under international law.

This is not to say that China lacks implements in its political arsenal to win “votes” in Southeast Asian societies by positive, rather than negative, measures. On the contrary: on the governmental level, China has been highly effective at using inducements—promises of infrastructure development; bribery and elite capture, etc.—to co-opt key weak links in Southeast Asian societies into acquiescing to China’s brazen behavior at sea. The case of the Philippines over the past six years is an illustrative example of this dynamic. In 2012, during the presidency of Benigno Aquino III, China used threats and intimidation to expel the Philippines Navy from Scarborough Shoal, a maritime feature well within the Philippines’ Exclusive Economic Zone. After violating a U.S.-brokered de-escalation agreement by sending ships back to the now-unprotected reef, China used its nominal maritime law enforcement instruments to harass and impose its will on Filipino fishermen, forcing them to vacate the area, thus leaving Scarborough’s rich fishing grounds to be harvested by Chinese vessels alone. When Rodrigo Duterte came to power in 2016, China used the allure of infrastructure investment to encourage Duterte in his apparent inclination to surrender his country’s otherwise strong political-diplomatic and legal position in South China Sea disputes. Once this took place, China allowed Filipino fishing vessels back into the lagoon of Scarborough Shoal—which is to say, China now permits the Philippines to enjoy the fruits of its own Exclusive Economic Zone only on terms set by Beijing.

Why China’s Campaign Is a Maritime Insurgency

If an analogy is to be drawn between China’s actions and any form of warfare here, it is to that of insurgency. While Clausewitz rightly states that all war is an extension of politics by other means, there is no other form of warfare that is as intrinsically political, as centrally wrapped up in questions of governance and law, as insurgency. At their core, insurgencies are contests over “who governs” in a particular population and geographical space, which is to say that the combatants fight to determine whose laws are in force and thus seek to find an answer to the earlier question of “whose laws do the civilians follow.”

Beijing seeks to employ Chinese national power to impose its own system of authority on the civilians of its Southeast Asian neighbors, working to compel their compliance through threats of force. This is something that insurgents and insurgencies have done since time immemorial. Theoretical literature about insurgency from T.E. Lawrence to Mao Zedong and beyond often refers to the vital component that is “the support of the people.” Yet this is a potentially misleading choice of words because it seems to refer to the civilian population’s positive sentiments and sympathies toward the insurgent. In fact, the actual dynamic at issue is control, which can be established by either inducement or, perhaps more commonly, fear. The Viet Cong (VC), for example, sought to compel Vietnamese farmers to effectively recognize VC authority by imposing taxes through threats of violence. Similarly, the Taliban seeks to forbid Afghan girls from attending school, and so they attack those who violate that dictate. While such attacks on schoolgirls are typically presented in the United States as the gross human rights violations that they are, these atrocities can be understood in a strategic context as a (morally despicable) means of asserting the Taliban’s authority over the civilian population they seek to control.

China’s use of its seapower to impose its own domestic law on Southeast Asian civilian mariners plying the South China Sea therefore fits well within the insurgent tradition, even if in this case the environment is a maritime one and the prevailing regime is a system of international law rather than a national government. Just as Beijing’s terrestrial approach to maritime sovereignty—its notion that distant ocean areas can be claimed like land—can be read as a evolution from China’s historical geopolitical position as an acquisitive continental empire, it should be no surprise that Beijing would bring a strategy of insurgency out to sea given the prominence of foundational insurgency theorist Mao Zedong in the Chinese strategic canon. China’s maritime insurgency has thus far proceeded largely unimpeded because its other, higher-profile lines of effort—its seizures of territory and its expansion of its anti-access/area denial envelopes—have so thoroughly captured U.S. and allied attention that they have successfully obfuscated the decisive effort (the forcible coercion of maritime civilian populations) and the eventual strategic object of their campaign (to impose an alternate, Chinese system of governance, overturn the prevailing system of international law at sea, and thus secure for China recognized, de jure sovereignty over the wide swath of the South China Sea that falls within the Nine-Dash Line).

How the United States and its Allies Can Prevail: Maritime Counterinsurgency

Once the strategic problem in the South China Sea is identified as an insurgency, it flows that the U.S. and allied strategic solution should be guided by insurgency’s natural countervailing strategy: counterinsurgency. Such an approach in the maritime sphere, a “maritime counterinsurgency,” would entail the protection of local civilian mariners, ensuring their security against Chinese harassment so they can safely exercise their lawful rights under the prevailing international regime of the freedom of the sea, thus giving civilians the physical protection and essential confidence to defy Chinese intimidation. Civilian populations must be reassured that the rules have not, in fact, changed. It is in this respect that current U.S. Freedom of Navigation operations fall short—while destroyer transits within twelve nautical miles of individual occupied maritime features may communicate legal messages about U.S. nonrecognition of particular territorial claims, such operations do not have any real practical effect because they lack staying power, and thus do not impact civilians’ confidence in their own ability to exercise their international legal rights. Both the civilians and the Chinese know that U.S. Freedom of Navigation operations are a transitory gestures, for as Chinese propagandists remind the world, the Americans always sail away, and civilians will be subject to intimidation and harassment as soon as the U.S. Navy is once again beyond the horizon.