Howard Stern Has Inspired Hillary Clinton to Start a Podcast? 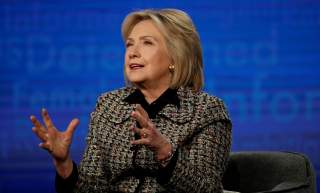 Hillary Rodham Clinton, former First Lady, former senator from New York, former Secretary of State, and former Democratic nominee for president of the United States, has announced that she’ll be starting a podcast produced by iHeartMedia. This career jump comes on the back of years of political personalities attempting to transition to media and entertainment.

According to Politico, the seventy-two-year-old Clinton was amazed by how different the podcast format was from previous media communication she’d seen during her career. “Clinton was struck by how different the hourlong conversation with [Conan] O’Brien was compared with short promotional segments on TV and radio…she started to think about how the format might allow her to record deeper conversations with newsmakers that listeners could enjoy well after they aired.”

The primary inspiration for Clinton’s move is Howard Stern, the New York shock-jock who’s been a national radio personality for over thirty years. Stern, who championed dirty humor during his early years (and supported the former secretary in 2016), had Clinton on his show in December. The former presidential contender was enamored by the man whose content she had avoided for so long. They spoke for over two hours, discussing a range of topics, personal to professional.

Clinton’s podcast, which remains unnamed at this moment, will utilize “a Stern-inspired ensemble plucked from the larger universe of Hillaryland.” This kind of elite access will open the possibility of big-name guests, including national politicians and international celebrities. The podcast, depending on how often it is released, will provide Clinton a platform from which to discuss daily politics and give her opinion.

Besides the addition of a potentially wacky comic sidekick, Clinton’s podcast would have significant overlap with The Axe Files, hosted by David Axelrod. The key strategist for both of Barack Obama’s successful presidential campaigns, Axelrod began in his podcast in 2015 and spent years interviewing politicians, journalists, and other prominent people in public life from a center-left position. It has a respected following among politicos.

It remains to be seen how Clinton will perform as a host, a career switch that has a shaky history. In 2014 former Alaska Governor and vice-presidential nominee Sarah Palin created a subscription-only online channel focusing on her life and commentary. It shuttered in less than a year.

Meanwhile, some politicians haven’t even waited until retirement. During the senate impeachment trial of President Donald Trump, Senator Ted Cruz began cohosted a podcast called “The Verdict,” which would summarize the daily drama of the trial. It immediately became one of the most popular podcasts on iTunes, surpassing The Joe Rogan Experience. Less than two months old, it’s unknown how long it’ll survive the conclusion of the trial.

Rep. Tulsi Gabbard of Hawaii, a Democratic presidential candidate and personal enemy of Hillary Clinton’s, launched her podcast earlier this month which follows her on the campaign trail.