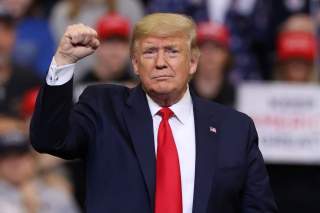 This brings to a close a constitutional process initiated by House Democrats in September last year, stemming from a complaint filed by a whistleblower involved in national security. This resulted in the public revelation that the president had ordered a halt on congressionally-appropriated military aid to Ukraine, in exchange for that country’s investigation of the business dealings of Hunter Biden, son of the former Vice President, Joe Biden. The latter is currently one of the candidates seeking the Democratic nomination and will possibly face Trump in the November election.

Democrats have alleged that this violated Trump’s oath of office, and that constitutes colluding with a foreign power to interfere in an American election. Republicans have defended the action as a legitimate use of the president’s executive authority over American foreign policy decisions. 230 House members voted to impeach Trump for his actions, while 197 voted against, and one Democratic Representative, Tulsi Gabbard of Hawaii, voted “present.” No Republicans voted to impeach, while two Democrats voted not to.

The Senate vote was also largely along party lines, excluding that of Senator Mitt Romney of Utah, who broke from Republican ranks. “I’m subject to my own conscience,” he explained to The Atlantic and subsequently voted for the first article of impeachment. Romney was long considered the most-likely Republican defector, considering his long, hostile personal relationship with the president.

Other Republicans, once considered wobbly by political observers, did not budge. Senators Lisa Murkowski of Alaska and Susan Collins of Maine, the two most liberal Republicans in the upper chamber, voted not to remove. Both are facing reelection this year. Another Republican facing a difficult reelection is Senator Cory Gardner of Colorado, who also voted to acquit.

Every Senate Democrat voted to convict, including those whose final decision was unknown until today. Senators Joe Manchin of West Virginia and Kyrsten Sinema of Arizona, the most moderate Democrats, did not acquit the president of his actions. Manchin has long been a Republican ally on judicial votes, including supporting Supreme Court nominee Brett Kavanaugh. Sinema, in contrast to her white-clad colleagues, wore a flamboyant blue dress to the State of the Union last night and was not afraid to clap for Republican initiatives she agreed with. Finally, Senator Doug Jones of Alabama, who likely faces an uphill reelection fight this fall against former Attorney General Jeff Sessions, also voted to convict.