Mitt Romney Will Vote to Convict President Trump. That Shouldn't Shock You. 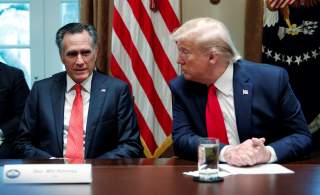 This afternoon Mitt Romney became the first Republican senator to announce he’s voting to convict U.S. President Donald J. Trump under the House’s articles of impeachment. This is the most recent event in what has been one of the most acrimonious political relationships in Washington D.C.

As early as 2012, when both men were focused on defeating Barack Obama’s reelection bid, cracks began to appear in the mutual-Republican bond. “He'd buy companies. He'd close companies. He'd get rid of jobs," Trump said, describing the former Massachusetts Governor’s business record. "I've built a great company. My net worth is many, many times Mitt Romney.”

Trump would endorse the Republican nominee, however, saying, “He's a warm, smart, tough cookie and that's what this country needs.” Romney, for his part, praised Trump’s “extraordinary ability to understand how our economy works and to create jobs” and admitted he was “not quite as successful” as the New York real estate mogul.

After Romney’s failure to unseat Obama, the relationship deteriorated and cratered during the 2016 presidential election when Trump was a candidate in his own right. As Trump barnstormed through the Republican primary, Romney gave a speech deploring his party’s frontrunner. “Here’s what I know. Donald Trump is a phony, a fraud,” Romney said that March, summarizing Trump’s behavior through “the bullying, the greed, the showing off, the misogyny, the absurd third-grade theatrics.” Trump responded by calling Romney “one of the dumbest and worst candidates in the history of Republican politics.”

Despite rumors that Romney would enter the 2016 race himself, he did not, and Donald Trump won the nomination and the general election. Romney has since said he wrote-in his wife Ann, rather than cast a ballot for the Republican nominee.

Victory against Hillary Clinton temporarily repaired their view of each other, as Romney lobbied to be appointed Secretary of State in the new administration. “We had some tremendous difficulty together, and now I think we’ve come a long way,” said then-president-elect Trump. After sharing a dinner that November, Romney described his conversations with Trump as “enlightening, and interesting, and engaging.” He “did something I tried to do and was unsuccessful in," but was now "the very man who can lead us to that better future."

Romney, who held that he had “no regrets” over his March speech, was passed over for the position, and former Exxon CEO Rex Tillerson was selected instead. This did not stop the former governor’s re-entry into politics, however. In 2018 he was elected as the junior senator from Utah, having gained Trump’s endorsement in the primary.

Having regularly criticized the president’s behavior in foreign policy last year, Romney previously called Trump’s withholding of aid to Ukraine in exchange for investigating the business practices of Hunter Biden “wrong and appalling.”

“The president did in fact pressure a foreign government to corrupt our election process,” Romney told The Atlantic yesterday afternoon, explaining his vote to convict and remove. “And really, corrupting an election process in a democratic republic is about as abusive and egregious an act against the Constitution—and one's oath—that I can imagine. It's what autocrats do.” He said he did not intend to vote for Trump in this year’s election.