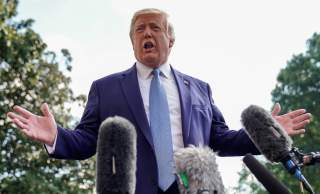 Whether or not the impeachment inquiry ends up devouring the Trump presidency, it is already consuming all of Washington’s attention. Even as Democrats ramp up their impeachment efforts by lining up a parade of officials to testify before Congress, Republican Party leaders are pushing back in defense of President Donald Trump. So far, the party has remained largely united behind Trump but some interesting fault-lines are beginning to emerge.

House Minority Leader Kevin McCarthy (R-CA) released a statement requesting Speaker of the House Nancy Pelosi (D-CA) to end the impeachment inquiry she launched last week until “transparent and equitable rules and procedures are established to govern the inquiry, as is customary.”

For instance, there was a kerfuffle this week over jurisdictional power within the Congress. The House Intelligence Committee, led by Rep. Adam Schiff (D-CA), has taken the lead on the impeachment inquiry, interviewing former Ambassador Kurt Volker yesterday and planning interviews with State Department officials in the next two weeks. Traditionally impeachment has been led by the House Judiciary Committee and matters of State and foreign policy fall under the House Foreign Affairs Committee.

“I was alarmed to learn—less than 24 hours before the first interview is scheduled to start—that it will be led by the Intelligence Committee and that questioning will be done solely by their staff,” complained Rep. Michael McCaul (R-TX), ranking member on the Foreign Affairs Committee. Furthermore, during Volker’s behind-closed-doors interview yesterday, only one staffer from the Foreign Affairs Committee was allowed to attend, while the Democratic-majority was allowed to send two.

“[T]he swiftness and recklessness with which you [Speaker Pelosi] proceeded has already resulted in committee chairs attempting to limit minority participation in scheduled interviews, calling into question the integrity of such an inquiry,” McCarthy declared in his statement.

He then proceeded to list several questions pertaining to how the inquiry will be conducted, including working through official House channels, the subpoena power, and the rights given to the president’s counsel. If Pelosi doesn’t intend to follow historical precedent on all of these matters, McCarthy said, then she’s not following standards of due process. “I look forward to your prompt response on this critical matter.”

And prompt it was. Only a few hours later, Pelosi responded with her own letter. “The existing rules of the House provide House Committees with full authority to conduct investigations for all matters under their jurisdiction, including impeachment investigations. There is no requirement under the Constitution, under House Rules, or House precedent that the whole House vote before proceeding with an impeachment inquiry,” she wrote, responding to criticism that what the Democrats are conducting in not an official inquiry.

President Donald Trump said today that the White House was preparing a letter to Pelosi formally objecting to opening an impeachment without the aforementioned House-wide vote. The difference would be how much the administration is required to disclose to congressional committees, and how much the White House will cooperate going forward.

Even senior Senate Republicans are refusing to break with the president. Sen. Thom Tillis (R-NC), an intra-party opponent of Trump’s hardline immigration policy, said yesterday that “The facts that they are operating on right now are not sufficient to move forward on impeachment or articles of impeachment.” Furthermore, “if that’s all they have, I think this is going to end up, it’s going to be another chapter in a saga of failed attempts just to reverse the election of 2016.”

Sen. Marco Rubio (R-FL), a primary opponent of Trump who sits the fence between ally and critic depending on the political issue, defended Trump’s comments to reporters yesterday after the president called on the Chinese government to launch investigation into the Biden family’s business dealings in their country. “I don’t know if that’s a real request or him just needling the press knowing you guys would get outraged by it. He’s pretty good at getting everybody fired up, he’s been doing that for a while, and the media responded right on task,” Rubio said.

But, as the National Interest reported last week, not every Republican senator is happy with the president’s behavior. In response to his public request for a Chinese-led investigation, Sen. Mitt Romney (R-UT) said in a tweet, “By all appearances, the President’s brazen and unprecedented appeal to China and to Ukraine to investigate Joe Biden is wrong and appalling.” Sen. Ben Sasse (R-NE) followed up by saying “Americans don’t look to Chinese commies for the truth.” Could a split be emerging among the ranks of the Republicans? If so, it will give Trump one more thing to worry about.