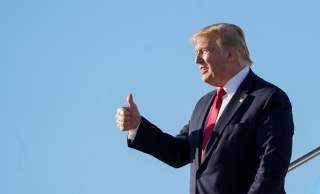 The poll was conducted over the latter half of January, during the midst of the Senate impeachment trial. The deliberative body is expected to acquit Trump of both charges later today.

The polling indicates that 63% of Americans approve of how Trump has handled the economy, a fact that could help his reelection chances. The United States is still experiencing an eleven-year long market expansion following the Great Recession. Unemployment stands at a fifty-year low. 59% of Americans say they are better off financially now than they were one year ago, a record-breaking number for Gallup polling. Furthermore, 74% of Americans believe they will be better off financially next year.

The most significant foreign policy action taken prior to the survey was the U.S. assassination of Iranian Major General Qasem Soleimani, the head of their foreign military operations (the Quds Force). Coming off of this confrontation with Iran, 53% of Americans approve of Trump’s military action, while 45% oppose the escalation. Overall, 47% of Americans broadly approve of the way Trump is handling foreign affairs.

Polls further show a significant amount of partisan divide. Trump currently has a 94% approval rating among his fellow Republicans, while only 7% of Democrats approve of the current Oval Office occupant. This 87-point difference is the largest gap in Gallop’s history.

This divided appeal tracks with impeachment polling conducted since last fall when the process began. Republicans opposed the impeachment in near unanimity, while Democrats supported it with equal numbers. Independent voter support ranged from the low to early forties, depending on the precise news cycle, but never verged over into a firm majority. Gallup tacks Trump’s current approval among independents at 42%.

This difference of opinion among American voters is likely to impact this year’s presidential election, specifically the conduct among Democratic primary voters. Vermont Senator Bernie Sanders, a self-described democratic socialist, is the current frontrunner to face Donald Trump in November.